OAKLAND COUNTY, Mich. (TCD) -- The 15-year-old who allegedly opened fire at Oxford High School on Tuesday has been arraigned on 24 charges related to the shooting that left four teenagers dead and seven injured.

According to the Detroit Free Press, Oakland County Prosecutor Karen McDonald charged the suspect, Ethan Crumbley, as an adult. The criminal complaint against Crumbley shows he faces one charge of terrorism causing death, four counts of first-degree murder, seven counts of assault with intent to murder, and 12 counts of possession of a firearm in the commission of a felony. Crumbley was transferred from Children’s Village to Oakland County Jail, where he is being held without bond.

McDonald said in a press conference she is "considering" charges against his parents.

The victims of the shooting were identified as 16-year-old Tate Myre, 14-year-old Hana St. Julian, 17-year-old Madisyn Baldwin, and 17-year-old Justin Shilling. According to an update from the Oakland County Sheriff’s Office, four additional victims were released from the hospital.

McDonald said in her press conference that investigators found a "mountain of digital evidence," including video and social media that she believes will prove the shooting was premeditated.

The Sheriff’s Office said the suspect was "involved in a meeting over behavior issues" on both the day of the shooting and the day before. The suspect did not have any bullying issues on record or other incidents of concern, according to the Sheriff’s Office.

According to CNN, investigators reportedly found videos on Crumbley’s phone that allegedly showed him talking about wanting to kill students at his school. The Detroit Free Press reports Assistant Oakland County Prosecutor Marc Keast said during the arraignment that the suspect went into a bathroom and emerged holding the gun.

Keast said, "At that point, he methodically and deliberately walked down the hallway, aiming the firearm at students and firing."

When Crumbley was taken into custody, he reportedly had 18 live rounds on him. Investigators discovered 30 spent rounds and three magazines at the scene. 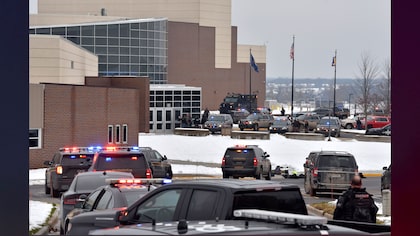