It was supposed to be a relaxing vacation in the beachfront paradise of San Diego, Calif., but instead a young mother ended up dead and the military veteran she just started dating was gone.

The beautiful young single mom falls in love with her perfect man. But her dream romance ends tragically when she's found murdered while the couple is on a romantic getaway together.

Her name was Krystal Mitchell, and she just about had it all: Stunning good looks, brains, a career and two beautiful children. The only missing piece in Krystal's life was "Mister Right." But when she finally met him, that's when something went fatally wrong.

Now her grieving mother Josephine, a former detective, turns back into a sleuth to join the manhunt for Krystal's killer. And Josephine uncovers vital new clues that help homicide investigators zero in on the man wanted for Krystal's murder.

Krystal Mitchell, just 30, looked more like a movie star than a divorced mom raising two young children on her own. To know her was to love her. She was smart and successful in real estate, working as a property manager in Phoenix, Arizona while preparing to become a licensed broker.

One day, a guy gawking at Krystal at a property she managed caught her attention. Krystal liked what she saw.

He is a 32-year-old insurance salesman named Raymond "R.J." McLeod, who was just Krystal's type: A buff, rugged-looking bodybuilder and former Marine Corps recruiter. And like Krystal, R.J. said he was divorced with a child about the same age as her kids.

"She told me, 'Hey, you know, I'm good. He passed two background checks, so this guy is clean and he has a good job,'" said Diana.

"She told me 'I feel like I can be myself with this guy. I feel protected,'" Diana said.

"I got a weird vibe from him, but again, me and Krystal, we definitely had different tastes in men," said Diana.

But there was something wrong with another man Krystal knew. And Josephine says Krystal had told her just days before her death that he appeared to be much more of a threat than R.J.

"She was telling me she had an ex that was bothering her," said Josephine.

She says Krystal was so alarmed that new boyfriend R.J. came to her rescue: "And she says, you know, he loaned her a gun to protect herself," Josephine said.

Krystal was afraid, and told her mom that new boyfriend R.J. feared for her safety too. And that only endeared him to Krystal even more.

Now R.J. had come up with a surprise that would get her out of Phoenix for a few days and ease her worries -- a romantic getaway to San Diego, Kyrstal's favorite vacation spot. Friends and family couldn't have imagined they'd never see Krystal alive again.

Diana remembers calling her the day Krystal and R.J. left on their vacation.

"The last thing she said to me was, 'Hey, we're about an hour away from San Diego. Can I call you back?' And I said yes, and I never heard back from her," said Diana.

And Diana, as well as Krystal's family, became deeply concerned when she hadn't responded to their phone calls and texts for nearly two days.

"I said to my husband, you know, 'Something's wrong,'" said Josephine. "I just started feeling sick to my stomach. I felt like I wanted to faint. Like I wanted to throw up. Like something was wrong."

Then stepdad Michael got a call from San Diego Police Homicide Detective Sgt. Matt Dobbs: Their daughter Krystal was dead.

Sgt. Dobbs said friends that Krystal and R.J. were staying with had found her lying lifeless in a bedroom in their home.

"There was obviously signs of a struggle inside the room," said Dobbs. "However I can't release details of what we found or the cause of death at this time.

"That's part of the investigation information we like to hold back," said Dobbs. "It allows us to vet information that we get in from potential witnesses or even with the interview of the suspect in a future date."

But Sgt. Dobbs does allege that Krystal's killer is boyfriend R.J., who was nowhere to be found.

"He was immediately a person of interest in the case," said Sgt. Dobbs. "Very quickly, as the investigation unfolded, he became the prime suspect."

"It appears he took Ms. Mitchell's car, which was later recovered at the San Diego Airport, and later we learned Mr. McLeod rented a car from the airport and drove to Mexico."

Baffled investigators are still trying to find a potential motive for Krystal's murder, although Krystal's mother believes the buff bodybuilder may have been taking steroids that can sometimes trigger violent behavior. But that theory has not been substantiated.

Murder charges were filed against R.J., and the U.S. Marshals Office issued a wanted bulletin. But after days turned into months with no leads on his whereabouts, Josephine's patience ran out.

"I decided to take matters into my own hands," said Josephine.

Josephine was once a cop on the island of Guam when her military family was stationed there.

"I used to be a detective when I was younger," said Josephine.

So she called on her law enforcement skills to launch her own investigation of her daughter's murder, and she made some shocking discoveries about R.J. Among them, that he had a rap sheet for two domestic violence cases, even though Krystal's family says she had run two background checks on him that had come up clean. Now her mom tells Crime Watch Daily they were credit checks, not criminal background checks.

"She didn't know anything about him," said Josephine.

R.J's latest arrest for domestic violence was just last year, only three months before Krystal's murder. He was charged with assaulting his second wife in Riverside, California. He pleaded not guilty and was released on $50,000 bond.

Josephine issued her own wanted poster of R.J. on Facebook.

"And it just went viral. We were getting phone calls. I was getting contacted left and right. It just didn't stop day and night," said Josephine.

Krystal's mom received reports that he'd been seen crossing the border into the Central American country of Belize, where several people said they'd seen him.

"One guy said, 'Oh, I met him at a bar and we had a drink,'" said Josephine. "A gal called me up. She says 'I'm a bar owner here in the beach and this man is at my bar.' It was just one story after the other after the other"

As a result, a bail bondsman is hunting for R.J. in Belize and working with San Diego Police, who have now been able to tighten their dragnet for the fugitive.

"We've also been given information from Krystal's mother, and we've followed up on those as well," said Sgt. Dobbs.

"It's absolutely helped and I would do the same thing if it were my child," said Dobbs. "Oftentimes people will be more responsive to a grieving mother asking for help than for a law enforcement organization."

Nobody is more proud of her than Krystal's hurting family and friends.

Now Krystal's mom vows she won't rest until her daughter's killer is captured and brought to trial.

Krystal's young son and daughter are now being raised by her mother Josephine and Josephine's husband Michael.

"I had to sit down and say 'OK, I gotta tell you that a bad man killed your mom,' and so I feel obligated to those little kids to bring justice, because they know there's a bad man running around out there that killed their mom," said Josephine.

Ex-Marine Raymond McLeod is believed to be armed and dangerous. If you have any information on his whereabouts, contact the San Diego Police Department. 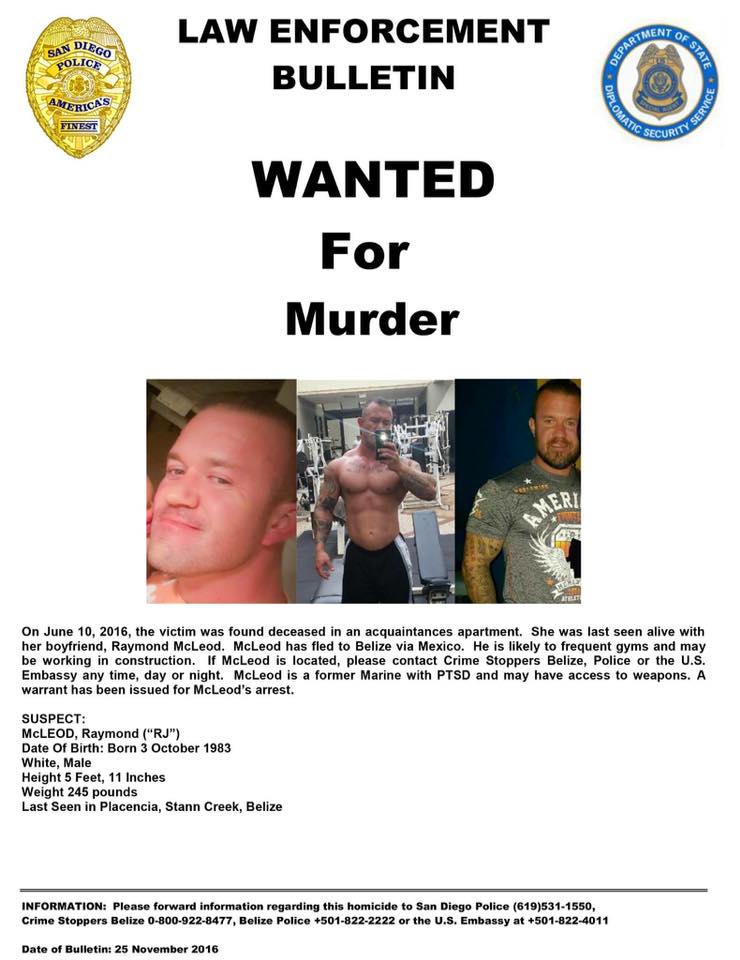 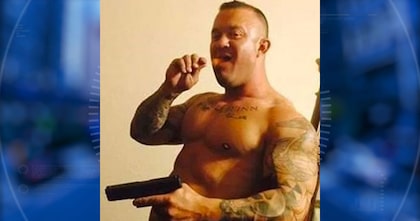