Yaser Abdel Said, a capital murder suspect wanted in connection with the homicide of his two teenage daughters, Amina and Sarah, was taken into custody without incident today in Justin, Texas, by the FBI's Dallas Field Office. Said is currently in federal custody and will be transferred to Dallas County.

The Dallas Morning News reports Said was taken into custody Wednesday in Denton County, according to police. Two of Said's relatives — his son Islam Said, and his brother Yassein Said — were arrested in Euless, accused of helping him to elude arrest.

"Honor." It's a word that has many different meanings.

In a Crime Watch Daily special investigation, you will see how the FBI says a father's twisted view of honor would end in a ruthless double murder.

It may be one of the most chilling 911 calls ever made: A terrified 17-year-old girl pleads for her life as she's being murdered -- we hear cries, and then silence.

And when the bloody bodies of Sarah Said and her 18-year-old sister Amina Said were found riddled with bullets in an abandoned taxi, investigators launched an international manhunt for the missing driver: The two teenagers' own father, Yaser Said.

Warning: Some of the things you are about to see and hear are very graphic.

The Said sisters apparently became the innocent victims of a tragic culture clash, the fatal collision of the old world tradition of arranged marriage and the ill-fated young love of a modern-day Romeo and Juliet.

Crime Watch Daily has obtained exclusive access to a vault of chilling home video and other evidence shedding a new light on the murders of Amina and Sarah, and it is being seen here for the first time on TV. The material was uncovered during the making of the documentary film The Price of Honor. The filmmakers agreed to share it with Crime Watch Daily to aid in our own investigation of this horrifying and heartbreaking case.

Amina and Sarah Said grew up in Texas under the strict rule of their father, Yaser Said, a man who is described by family members as extremely controlling and abusive -- mentally and physically. In disturbing home videos made by Yaser himself, you can see how the Said sisters seemingly lived every day in fear.

Strict parenting is one thing. Spying on children like they are criminals is another. Family and friends of Amina and Sarah Said say their father had crossed that line over and over again, even bugging the sisters' cars so he could track their every movement. They also reveal his verbal and physical abuse was escalating. And soon, a teen crush would push him over the edge.

Friends say the Said sisters' overprotective and rage-filled father was sent over the edge when he discovered Amina had a secret boyfriend.

Fearing for their lives, the two girls and their mother make a snap decision to run. But investigators say their vengeful father had other ideas.

"My dad is going to kill me." These are the words written by Amina Said to her secret boyfriend. When her father found out about that relationship -- it sent him into a vindictive rage.

They believe he may seek shelter in communities with Egyptian ties. He frequents Denny's and IHOP restaurants, smokes Marlboro cigarettes and is a dog-lover.

Yaser Said is known to have ties to New York, Texas, Virginia, Canada and Egypt.

A $100,000 reward is offered for information leading directly to the arrest of Yaser Abdel Said.

If have any information about Yaser Said and his whereabouts, contact the FBI at (800) CALL-FBI . 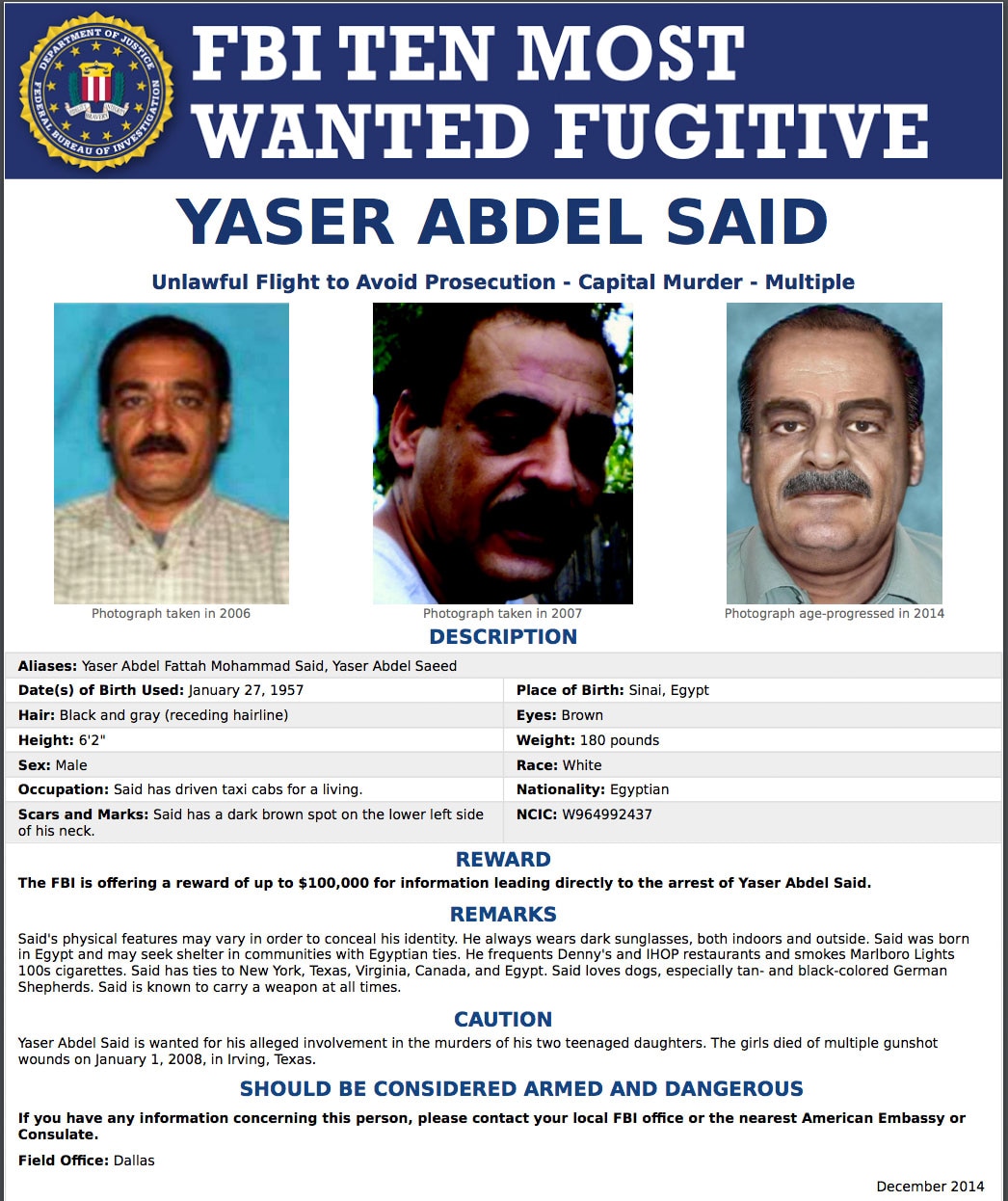 For more on the case, and the practice of so-called "honor killings," visit The Price of Honor documentary film website.