The Los Angeles County Sheriff's Department is on the hunt for one of the drivers connected to a horrifying street-race accident that claimed the lives of three people. 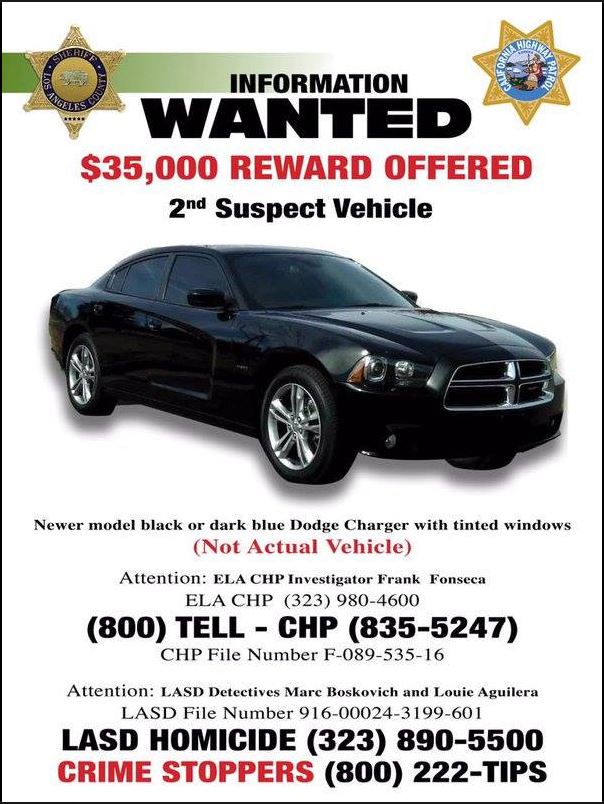 Law enforcement all over the country will agree that illegal street racing is on the rise, and it can often have deadly consequences.

Michelle Littlefield was a beautiful, vibrant young woman with dreams of being a writer. Scott Treadway was a veteran UPS driver and proud father. College student Brian Lewandowski's kind smile was forever erased.

This was no tragic accident. This was something far worse.

"There's no doubt to me that this is a murder," said Los Angeles County Sheriff's Homicide Detective Louie Aguilera.

On Friday, Feb. 26, 2016, the two head to the Disneyland with their friends Alfonso Morillo and Anthony Miramontes.

Then, a horrific crash on California's Interstate 5 freeway just after midnight on Feb. 27.

According to LAPD detectives, three lives were snuffed out by Dealio Lockhart.

By day, Lockhart is a popular field producer for the hit TV series "Dancing With the Stars." By night, detectives say, Lockhart had a need for speed, an obsession with a growing epidemic on the nation's highways and byways: illegal street racing.

"Just a sense of entitlement," said L.A. County Sheriff's Homicide Detective Marc Boskovich. "There's 'I like this so I'm going to do it. It's all throughout our culture."

"As racers do, they started jockeying for position, revving up their engines possibly, one staggers in front of the other and the race is on," said Det. Aguilera.

It was 11 miles high-speed racing from the streets of Hollywood to the busy California interstate freeway, with the racers topping speeds of 127 miles per hour.

"It immediately caused the truck to go head-on into the center median," said Aguilera.

Lockhart is not injured. Treadway is killed as his truck shears the top off the Nissan carrying Michelle Littlefield and her friends. Littlefield and Lewandowski are killed. Their friends, passengers Anthony Miramontes and Alfonso Morillo, to this day remain in grave condition, with one in a coma.

Sheriff's detectives Aguilera and Boskovich are assigned to the case and are dispatched to the scene.

"It truly looked like a Hollywood set, something that you would see out of a 'Transformer' movie," said Boskovich.

Aguilera and Boskovich are given a particularly troubling piece of information: Lewandowski's father, Victor, is one of their own, a sheriff's homicide lieutenant.

"That was definitely a big factor into how painful this was to see," said Aguilera.

This time it's personal. They investigate along with the California Highway Patrol, with a heavy heart.

Dealio Lockhart has been charged with three counts of second-degree murder.

The courts received dozens of letters from Lockhart's "Dancing With the Stars" co-workers, begging for his $6.2-million bail to be reduced, insisting Lockhart is a good guy, whose past infractions include only a couple of speeding tickets.

"Even though you're a 'good guy,' you made a horrible decision to endanger everybody's life that night," said Boskovich.

Adding insult to real-life injury and death, detectives say Lockhart displayed no concern for what happened, not even offering to assist the injured.

"We have witnesses say he was in his car looking for his phone," said Boskovich. "That speaks volumes to me at what type of person this was."

The new reality for this TV producer is potentially life behind bars. But it took two to cause this horror. What about Lockhart's alleged opponent? That person and his late-model Dodge Charger are gone.

"We're pretty certain that this person spoke to somebody, maybe saying 'Hey, I'm the one that got away with it, I'm the one they're looking for,'" said Aguilera. "And we're hoping from anybody, from any of your viewers, anybody from the public to come forward and give us that information."

Even family members in their grief and sorrow beg for justice

A $35,000 reward is being offered for information leading to an arrest.