UPDATE Jan. 10, 2017: Authorities believe they have found the remains of Sid Cranston Jr. nearly 18 months after he disappeared, and have ruled his death a homicide, KNXV reports.

Police have no suspects in Sid Cranston Jr.'s disappearance, but his family is convinced one man knows more than what he's saying.

Kingman, Arizona is a small desert community along historic Route 66.

It seemed an odd choice of a location for a young, aggressive New Yorker to settle, but Sidney Cranston Sr. says his oldest son saw dollar signs. Within 10 years, Sid Jr. made a nice nest egg from real estate investments, nearly 50 of them throughout Mohave County.

By the age of 40, Sid Jr. semi-retires and decides to spend time with his fiancee in Mexico.

Sid returned in June 2015 to Kingman for an important city council meeting about a house he's remodeling.

Sid spends that morning at his office, then heads out on his motorcycle to collect about $2,500 in rent money and calls his brother Chris to tell him about one of his vacant houses that was burglarized the day before.

Around noon, Al Blanco, Sid's friend and contractor, tells Chris he met Sid for lunch. Blanco said Sid then took off to meet clients and settle one last real estate deal before returning to Mexico.

Sid never shows; he never makes another phone call. He simply vanishes into the Arizona desert

By 11:30 that night, Sid's phone battery is dead, and sadly, his father, brother and even Kingman police believe Sid probably is too.

While search-and-rescue teams scour the desert, Sharman does his own digging. Sid's motorcycle was found at a property that Al Blanco manages. And Sharman says he was never able to confirm Sid had any appointment with a client.

Sid's phone records were obtained by the Mohave Sheriff's Department, revealing Sid's last call was around 1:30 p.m., and the battery died at 11:30 p.m. So where was his phone during those 10 hours?

Using cell-tower transmission records and customized maps, investigators were able to trace every area Sid's phone travels to by the tower it pings off.

"Basically his phone heads out of Kingman, goes three exits out of town and is out in that area for several hours," said Chris Cranston.

"And then it returns back here to Kingman. It pings off a tower that's less than a mile from Al Blanco's house. And then it never pings ever again," said Lyle Sharman.

According to the sheriff's report, Blanco's phone was in the same area at the same time.

A local jewelry store owner called police the morning after Sid vanished and said a man walked into his store with two rings for sale, and he believed they belonged to Sid.

While the police won't confirm or deny who sold them, Sharman says the jeweler positively identified the seller as Al Blanco.

Crime Watch Daily confronted Al Blanco in Kingman with Sid's brother Chris Cranston. Blanco refused to talk on camera, and even reported the incident to police.

It's a big desert, but the Cranstons are willing to go through it one grain of sand at a time to find Sid. 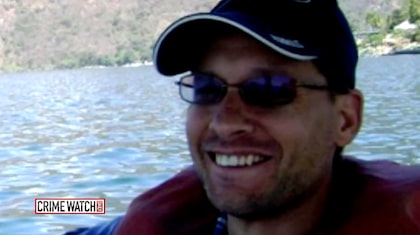