In Salt Lake City, two sisters are thankful for a quick-acting police officer who saved them from a knife-wielding suspect who snuck into their home in the middle of the night.

Bre and Kayli Lasley were recently reunited with Officer Ben Hone, who fatally shot the armed intruder that broke into their house and attacked them with a knife. 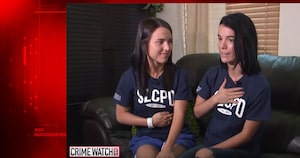