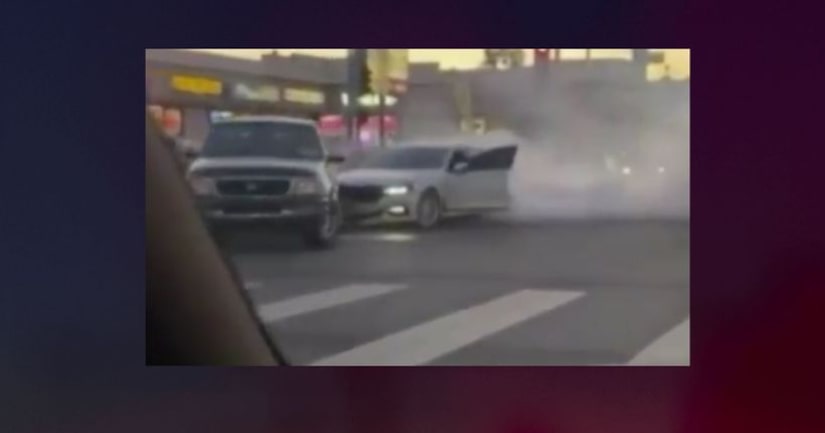 NORTH HOLLYWOOD, Calif. (KTLA) -- Authorities have identified a man arrested in connection with a road-rage incident in North Hollywood that was caught on video earlier this week.

David Zulalyan, 27, of Van Nuys, was taken into custody Monday night, hours after video showed him appearing to intentionally ram another vehicle at a busy intersection.

Video taken by a bystander waiting at a red light shows a white car with its driver-side door wide open pushing a pickup truck through the intersection. After the initial crash, the driver of the white car is seen chasing after the pickup truck before a second collision.

The bystander can be heard saying “oh, my God” in the background, over the sound of screeching tires and car horns.

At least one pedestrian on the sidewalk can be seen darting away from the incoming vehicles. It is unclear if anyone was injured during the incident.

The video was posted on Twitter by "BEN BALLER" about 5:30 p.m. Tuesday, prompting the LAPD to respond asking for further details. However, Zulalyan had already been arrested on suspicion of assault with a deadly weapon at that time, records show. LAPD officials later announced on the social media platform that a suspect had been arrested.

It is unclear if the viral video or other footage were instrumental in the arrest. It is also unclear what led up to the incident.