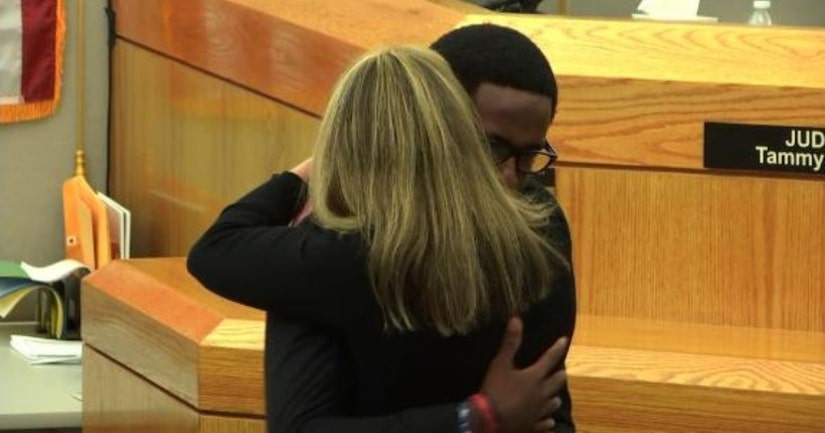 DALLAS (WPIX) -- Brandt Jean, the brother of the Botham Jean, whom Amber Guyger shot dead last year, told the former Dallas police officer he forgives her and didn't want her to go to prison.

After giving his victim impact statement, Brandt Jean went over to Guyger and the two hugged as Guyger bawled.

“I love you as a person and I don't want to wish anything bad on you,” Jean said before they hugged for nearly 30 seconds.

A Texas jury has given Guyger a 10-year murder sentence for fatally shooting Botham Jean in his Dallas apartment.

Jurors on Tuesday found Guyger, 31, guilty of murder in Jean's 2018 killing, which made national headlines. She had faced between five years and life for the shooting.

Before the jury made its decision Wednesday, it heard from character witnesses, including Jean's and Guyger's family members.

'Botham was my absolute person'

Wednesday's testimony opened with Jean's close friend sharing stories of his love for sports and God. She wept over a text message she never sent to him.

Alexis Stossel met Jean her junior year at Harding University in Searcy, Arkansas. They became best friends after they were appointed to sit on a business school advisory board, she testified.

The hearing began shortly after Tuesday's verdict, in which jurors found Guyger, 31, guilty — despite the ex-officer's defense that she mistakenly walked into the wrong apartment and opened fire because she thought Jean was an intruder.