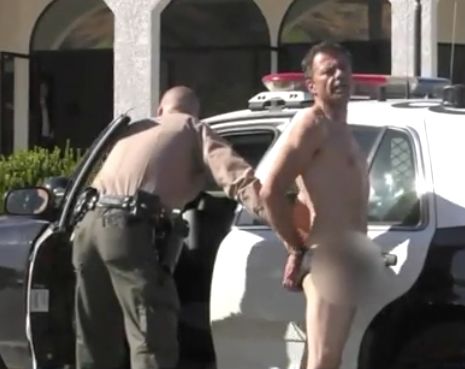 KTLA
KTLA - "By the time he was arrested, he had stripped down to nothing but what appeared to be a sports bra as underwear and ranting about the government."

NEWHALL, Calif. -- (KTLA) -- Deputies arrested a nearly naked man on Thursday after a bizarre rampage in which he allegedly broke in and vandalized a Newhall church and ran onto the 5 Freeway.

The incident began around 9 a.m. Thursday at the Newhall Church of the Nazarene when the suspect, identified as 48-year-old Kit Kipnas, was seen on surveillance footage breaking in through a window, according to the Los Angeles County Sheriff's Department, Santa Clarita Valley Station.

Pastor Josh Johnson said he heard the glass shatter and called 911 when an alarm went off. He said the suspect had used a fire extinguisher and was listening to a radio.

Johnson said the radio was on full blast as the man vandalized the back part of the church, writing his mother's personal information on several chairs.

The intruder, who the pastor said has no ties to the church, then ran onto the 5 Freeway, stripping off most of his clothes in the process.

A deputy located the suspect on the 5 Freeway. The deputy and a passerby detained the suspect at the center median, just south of Calgrove Boulevard, deputies said.