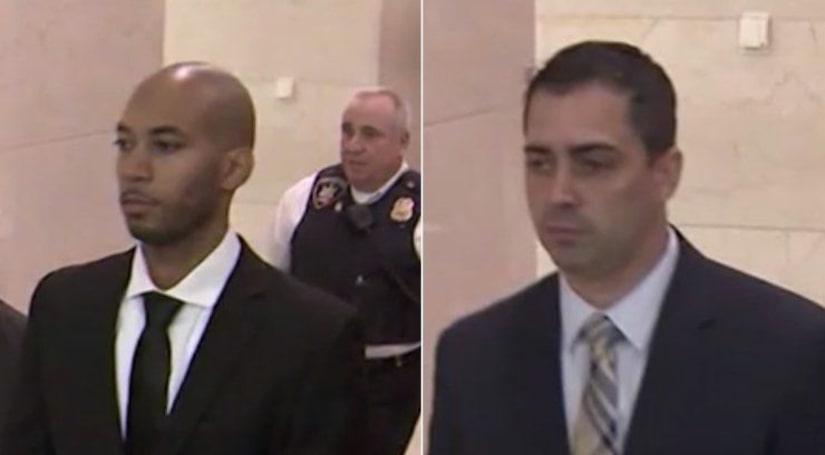 NEW YORK (KTLA) -- Two former New York detectives will serve no prison time after pleading guilty to bribe taking and official misconduct for having sex in a police van with a young woman they arrested and released, prosecutors said Thursday.

Prosecutors had requested that Eddie Martins, 39, and Richard Hall, 34, receive sentences ranging from one to three years in prison, Brooklyn District Attorney Eric Gonzalez said in a statement.

But State Supreme Court Justice Danny Chun indicated each defendant will be sentenced in October to five years probation, according to Gonzalez. The plea agreement was offered by the court — without prosecutors' consent — because the defendants pleaded guilty to the entire indictment, the district attorney said.

In court, the judge said he agreed to probation because prosecutors had demonstrated that violent felony counts against the defendants — including rape charges that were eventually dismissed — couldn't be proven beyond a reasonable doubt.

“The credibility of the victim, or the complainant, in this case was seriously, seriously questionable, at best,” said Chun, according to a court transcript obtained by CNN.

While scientific evidence in the case was “very compelling,” Chun said there was a possibility of a jury convicting only on the misdemeanor charges. The offer of probation without jail time was not “unjust or unfair” since the former officers had resigned from their jobs and had accepted felony convictions with their pleas, the judge said, according to the transcript.

Chun expanded on his reasoning for the plea deal, arguing that by law, their accuser could be charged for offering a bribe to the two former police officers.

“The other party offering a bribe could also be charged… which is the same level of felony as bribe-receiving,” Chun said, according to the court transcript. “Given that there are criminal activities on both sides, however, there is one critical difference here: both the defendants before me are police officers and police officers are sworn to uphold a higher standard of ethical code, behavior or higher standard, period, than other people engaged in criminal activity.”

MORE: No prison time for 2 ex-NYPD detectives who pleaded guilty to having sex with handcuffed 18-year-old while on duty - KTLA