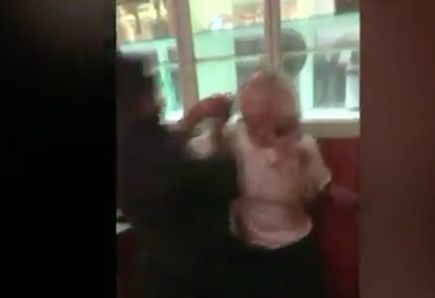 KTLA
KTLA - "'We thought the security team was going to protect us but instead they threw us out like trash,' Rios said."

LOS ANGELES -- (KTLA) -- The forceful removal of a group of transgender women and a gay man from a Los Angeles bar is being investigated as a possible hate crime, police said Monday.

A complaint about an incident at Las Perlas bar Friday was filed with police and detectives are investigating, said department spokesman Officer Jay Chaves.

"Los Angeles is a place where hate against any person, regardless of gender identity, is not tolerated. My office is in communication with @LAPDHQ about the incident at Las Perlas, and will ensure a proper investigation is completed," Garcetti said in a tweet.

Khloe Rios, who recorded the video, said she and a group of colleagues from Bienestar Human Services, a nonprofit that focuses on health issues in Latino and LGBTQ communities, were having dinner when a straight couple approached them and started yelling slurs.

"They said, 'You guys are all men. You are not women. You don't belong here,'" Rios said.