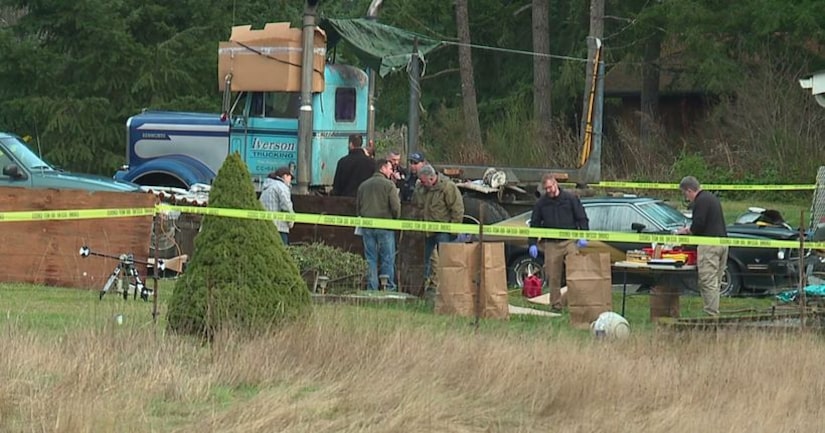 PORT ANGELES, Wash. (KCPQ) -- A man has been arrested in connection with the deaths of three people whose bullet-ridden bodies were discovered under tarps and in an outbuilding in western Washington, authorities said.

According to the Peninsula Daily News, a Washington State Patrol SWAT team raided the suspect's property in the 2500 block of Lower Elwha Road. A Clallam County sheriff's deputy said the SWAT team executed the search warrant around 7:30 a.m., calling it a complex scene with multiple structures and people living on the property.

Authorities used a stun grenade as they entered the building, and the suspect surrendered without incident, King said.

The suspect was taken into custody and is being held without bond in the Clallam County Jail for investigation of three counts of second-degree murder. Q13 News is not yet naming the suspect because formal charges have not been filed.

Clallam County Chief Criminal Deputy Brian King said Thursday that the suspect is "believed to be involved" in their deaths, but he did not call him the shooter.

No motive for the killings was immediately released.

The gruesome scene was discovered during a welfare check by deputies Dec. 31 in Port Angeles. Family members of the people who live there told police they hadn't heard from their relatives since Christmas and were concerned.