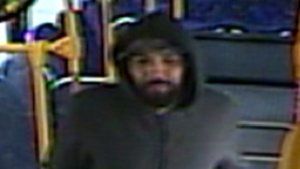 San Bernardino Police Dept.
KTLA - "Police are seeking the man pictured in this surveillance camera photo in connection with the sexual assault and stabbing of a woman in San Bernardino on Jan. 12, 2019."

SAN BERNARDINO, Calif. -- (KTLA) -- Investigators released photos Wednesday of a suspect sought in the sexual assault and stabbing of a woman in San Bernardino earlier this month, authorities said.

The attacker had gotten of an sbX bus in the area of Rialto Avenue and E Street, police said.

He then lured the victim to a nearby business “and made sexual advances that she resisted,” the detective said.