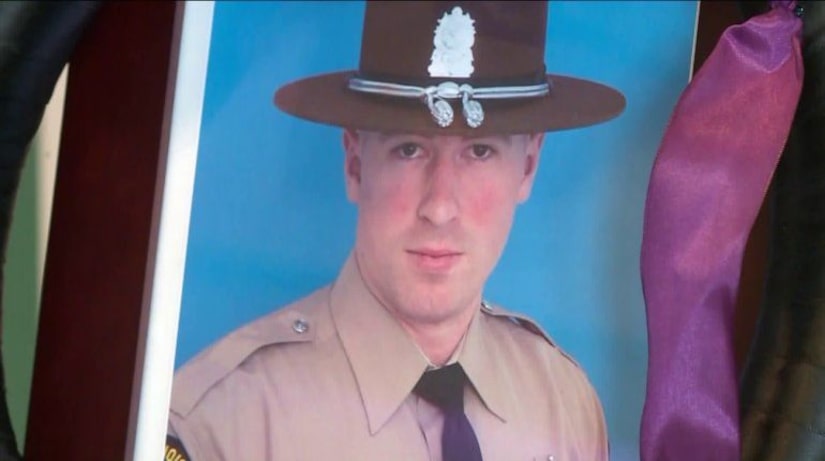 SKOKIE, Ill. —- (WGN) -- Law enforcement agencies across the region are mourning the death of Illinois State Trooper Christopher Lambert after he was struck by a car and killed Saturday after stopping to help victims of an accident while he was on his way home.

Flying at half staff, the flags snapped to attention outside of Illinois State Police Post 15 in Downers Grove Sunday. Inside, a portrait of 34-year-old Trooper Christopher Lambert wreathed in purple and black served as a memorial to the man who lost his life protecting the public.

Accompanied by a procession of police vehicles, Lambert's body arrived at a funeral home Sunday afternoon, less than 24 hours after he died in a tragic traffic accident.

Authorities say Lambert was on his way home at the end of his shift Saturday when he spotted a traffic accident in the snowy conditions on I-294 near Willow Road. He stopped to help, and was hit by another car.

“All of law enforcement does that. That's what we do," Illinois State Police Director Leo Schmitz said. “We lost one of our own. One of our best.”

After a news conference Saturday night, word of his death was sent to the state police force in a somber dispatch signifying the “End of Watch." Radios fell silent for the long procession to the morgue. Firefighters used ladder trucks to form an archway, unfurling an American flag to honor Lambert's military service and five years as a trooper.