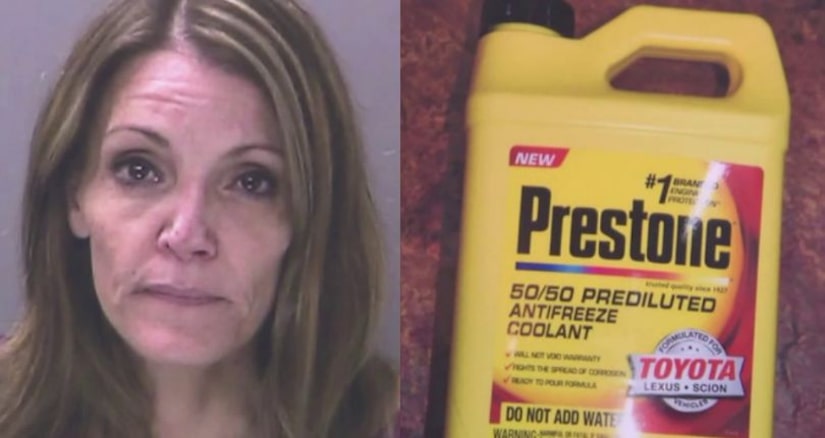 LONG ISLAND, N.Y. (WPIX) -- A prosecutor alleged Thursday that a woman tried to kill her estranged husband by pouring antifreeze into his beverages inside his Long Island home.

According to officials, the weapon of choice was antifreeze.

Renee Burke, 40, of Holbrook, pleaded not guilty to charges of attempted murder of her estranged husband Matthew Burke. She's also charged with attempted assault, burglary and endangering the welfare of a child, according to Suffolk County District Attorney Timothy Sini.

Burke's attorney, Joel Salinger, declined to comment but said in court she has no criminal history and that she has always fought hard for her children. Authorities said the husband has primary custody of their children, ages 4 and 8.

"It is alleged that between Sept. 1 and Sept. 12, 2018, on multiple occasions, the defendant attempted to kill her estranged husband by unlawfully entering his residence and pouring antifreeze into several beverage containers in his apartment," Sini said.

"The evidence in this case includes video surveillance that shows the defendant taking a wine bottle out of the refrigerator and taking baby bottles filled with antifreeze and pouring the liquid into the bottle," Sini said. "And she did this in the presence of her child and even with the assistance of her child."

Sini said that when questioned by police, Burke "claimed she poured fruit juice into the victim's wine bottle to water it down."

Burke's phone contained searches on antifreeze and rat poison, and antifreeze was found in her kitchen, said Sini, adding that the husband set up cameras after one of the children told a baby sitter: "I saw Mommy putting something in Daddy's drink."

On September 12, Renee Burke was arrested in Patchogue as she handed the kids over to Matthew Burke.

That arrest was for burglary, but law enforcement officials continued to build their case.

The district attorney said Burke told police she used fruit juice to water down the wine. When police searched the Grundy Avenue home, they found antifreeze in the kitchen.

At court Thursday, Renee Burke's defense lawyer said no comment. There are multiple charges including including attempted murder. She pleaded not guilty. Cash bail was set at $200,000 or $400,000 bond.