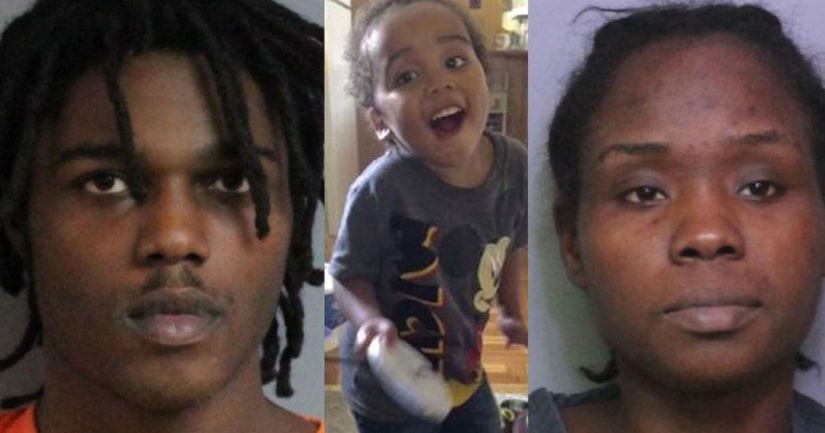 POLK COUNTY, Fla. -- (WKMG) -- A man who beat his girlfriend's 2-year-old son on multiple occasions, eventually leading to his death, was encouraged by the boy's mother to continue the abuse, according to the Polk County Sheriff's Office.

On July 31, Harley Don Hiatt Jr., 2, was found unresponsive and taken to Heart of Florida Hospital where doctors determined he had a brain bleed and was pronounced dead at 6:55 a.m.

Authorities said they asked his mother, 26-year-old Shannon Short, about his injuries and she said her live-in boyfriend, 26-year-old Christian Thompson, was caring for her son a few days earlier and he caused the injuries.

Deputies said previous injuries included bruising, an injury to his penis, a wound completely through his bottom lip. In one instance, Short texted Thompson and told him to, "(expletive) him up," followed by an angry face emoji, referring to abusing Harley, according to deputies.

The day before he died, Harley was vomiting, doubled over holding his stomach, moaning and dry heaving, but his mother did not seek medical attention because she was afraid that authorities would get involved, deputies said. Instead, she gave the boy antibiotics and went to smoke marijuana with her boyfriend, the report said.

An autopsy revealed that Harley suffered numerous bruises on his face that appeared to be caused by a belt, various scars and scratches, a lacerated bowel that led to an infection called peritonitis and areas of hemorrhage in his brain and skull. Officials said the latter injuries, which ultimately led to his death, were caused by blunt force trauma and he would have survived if medical attention had been sought.