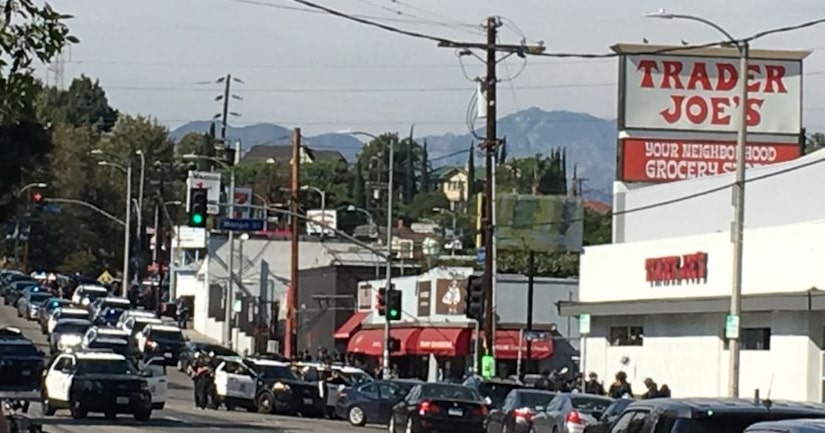 The Los Angeles Times reports the grandmother was in critical condition after undergoing surgery, according to Los Angeles Police Chief Michel Moore. The second woman injured by the gunman suffered a relatively minor head wound and was in good condition, he said. Family members later identified the woman killed at the scene of the standoff as Melyda Corado.

In addition to the first two women who suffered gunshot wounds, six other people — including the suspect — were all taken to the hospital to be treated and were in fair condition, L.A. fire officials said. They ranged from 12 to 81 years old, KTLA reports.

LOS ANGELES --(CWD) -- One woman was killed and approximately 40 hostages, including children, were safe Saturday after a barricaded gunman surrendered to police at a grocery store in Los Angeles.

The suspect was wounded in a gunfight with officers after allegedly shooting his grandmother multiple times, killing her, then kidnapping an injured woman and leading a violent police pursuit. It was earlier reported here that the grandmother died. The grandmother was later reported to be in critical condition. A woman was killed at the scene of the standoff in Silver Lake.

Los Angeles Mayor Eric Garcetti and LAPD Chief Michel Moore held a news conference to give details about the situation at the scene at 6:50 p.m. Pacific Time.

Investigators believe about 1:30 p.m. Saturday, a 28-year-old man shot his grandmother multiple times at a home in South Los Angeles. A younger woman was wounded in the incident, and the man allegedly took her from the home against her will.

Los Angeles Police located the suspect's vehicle via LoJack and attempted to pull the car over, and a pursuit began. The suspect shot at police several times through his rear windshield, before crashing in front of a Trader Joe's store in the Silver Lake neighborhood.

The suspect exited the car and exchanged gunfire with police, wounding him at least once in the left arm. The suspect then went into the Trader Joe's, and police said a woman was shot in the front of the store. She died at the scene.

Authorities estimate there were about 40 people inside the store. The suspect took numerous hostages, including shoppers and employees.

Over the next three hours, multiple rescues were made from different entry points to the building with the aid of police officers. Additionally, the gunman also released some hostages, Garcetti and Moore said. Children were among those freed.

The suspect asked for handcuffs, cuffed himself and surrendered to police. Garcetti and Moore said the suspect cooperated with negotiators on his own phone over the course of the incident.

The investigation was ongoing. Officers were working to clear the building for further hostages. The area was expected to be closed down for 12-14 hours, the mayor said.

A suspect has been detained and several hostages have walked out of the store, safely escorted by police. The suspect was handcuffed and was walked over and loaded into an ambulance by officers. The suspect appeared to be bleeding from the arm.

#UPDATE: We have successfully taken the suspect into custody without incident. The situation remains fluid as officers move forward clearing the location.

Events began with a shooting in the 1600 block of 32nd Street around 1:30 p.m. in which an elderly woman and a young woman were victims, LAPD Officer Mike Lopez told CNN.

The suspect fled in a 2015 Toyota Camry and during a police pursuit, the suspect fired multiple rounds at officers, Lopez said. None of the officers was injured.

The chase ended when the suspect crashed the vehicle, got out and ran into the store on Hyperion Avenue, Lopez said. Customers ran out of the store, he added.

Los Angeles Fire Department spokeswoman Margaret Stewart said a 20-year-old female patient was transferred to a hospital in fair condition. She was removed from a vehicle, not the inside of the store, Stewart said.

“We are on standby and prepared to support but no confirmation how many patients may be inside,” Stewart added.

Public safety agencies responded in force, with an armored police vehicle parked outside the store and seven ambulances and dozens of law enforcement vehicles arriving on the scene.

Aerial video shot from a helicopter showed armed officers carrying shields and a man walking out with his hands up.

The video also showed officers carrying a person who appeared to be injured, as well as people climbing out of a store window and down a rope ladder.

Witnesses at the scene said police officers and the suspect exchanged gunfire as the suspect ran into the store.