LILBURN, Ga. -- (WGHP) -- “The Dancing Doctor” has agreed to give up her medical license for at least two and a half years, according to an agreement filed Friday with the Georgia Composite Medical Board.

The consent order signed by Windell Boutte, a board-certified dermatologist, says that her license to practice medicine in Georgia is indefinitely suspended, but after two and a half years she can petition to have the suspension lifted.

She cannot use the title “doctor” or engage in the practice of medicine during her suspension, the document says, and will drop her own court case in which she seeks a temporary restraining order.

The publicist team for Boutte issued this statement: “Windell Davis-Boutte respects the process and has voluntarily accepted the consent order for suspension. She is hopeful that the suspension will be lifted and she is able to practice Medicine at some point in the near future.”

The consent order doesn't mention the now-deleted YouTube videos of Boutte during medical procedures. In one video, she dances with surgical instruments in both hands and leans over a patient's half-bare buttocks while rapping her own lyrics to Migos' “Bad and Boujee.”

The consent order, instead, describes seven instances of questionable treatment between 2014 and 2018 for patients who underwent procedures such as liposuction, fat transfer or breast augmentation.

On June 7, the day after HLN's interview with Boutte, the Georgia Composite Medical Board suspended Boutte's license to practice medicine, citing allegations of malpractice regarding her treatment of seven patients.

In the interview with HLN, Boutte defended her music videos. 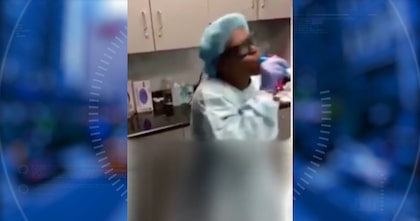 Doctor under fire for allegedly dancing, singing during surgeries