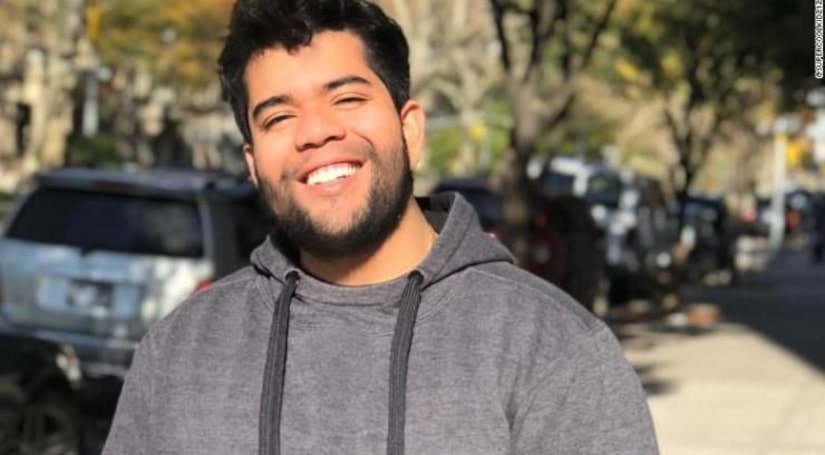 NEW YORK -- (KTLA) -- An Ivy League student who waged a public campaign to end rape and sexual abuse has been arrested in New York in connection with claims he intended to engage in sexual activity with children as young as 2, according to federal prosecutors.

Joel Davis, a student at Columbia University, was arrested Tuesday on child pornography and attempted child exploitation charges, said prosecutors, who based the allegations on testimony from two undercover FBI agents who allegedly exchanged text messages with Davis.

Davis, 22, founded and serves as executive director of Youth to End Sexual Violence, an international organization that claims to be youth-led and “dedicated to eliminating the use of rape and sexual violence in conflict,” according to its website.

“As if this wasn't repulsive enough, Davis allegedly possessed and distributed utterly explicit images of innocent infants and toddlers being sexually abused by adults. Crimes against children such as those alleged are taken very seriously by the FBI,” William Sweeney Jr., FBI assistant director-in-charge in the New York office, said in a statement.

He has not entered a plea, court officials said. If convicted on all counts, he could face the maximum of life in prison, prosecutors said.

CNN's attempts to reach an attorney for Davis on Thursday were unsuccessful. Youth to End Sexual Violence did not immediately reply to CNN's request for comment.

A campus activist on an international stage

The organization Davis founded is listed among the “renowned human rights experts and civil society leaders” that make up the steering committee of the International Campaign to Stop Rape & Gender Violence in Conflict. The group, which claims to foster partnerships between Nobel Peace laureates and international advocacy organizations, has not responded to CNN's request for comment.

Davis in April was described as an “activist and survivor” on a list of 22 planned speakers for a TEDx event at Columbia. The event was organized independently of its namesake TED organization, known for its TED Talk lecture series.

Davis also was described by his university's student newspaper as an activist working to end sexual violence against children. Davis contributed at least six columns last year to the publication, the Columbia Daily Spectator, including one in which he claimed he endured sexual abuse as a child.

Further, Davis claimed on his LinkedIn online resume to have served as a youth ambassador for the United Nations in the role of special representative on sexual violence in conflict. However, the intergovernmental organization's top executive on Thursday said that office “has no formal relationship with Mr. Joel Davis” and “does not have any so-called Youth Ambassadors or equivalent title,” according to a statement issued by spokesman Stephane Dujarric.

Davis had, in the past, attended UN events on sexual violence issues, and “he is one of numerous activists who has come through the Office over the years,” the statement said, adding that the UN “is shocked and appalled by the allegations of child sexual abuse” against Davis.

'Dark corners of the internet'

Federal prosecutors allege Davis engaged in activity in May and June that conflicts with the image of a man committed to ending sexual violence.

Davis told the two undercover FBI agents he'd had sexual experiences with 9-month-old and 7-year-old boys and with a 6-year-old girl, according to the criminal complaint. He also attempted to meet with a 9-year-old girl and a 2-year-old girl, prosecutors said.

The text conversations allegedly went on for more than a month, and Davis sent sexually explicit pictures and videos of young children, including infants, an FBI agent said in the complaint, which details the extremely graphic nature of the images.

Davis allegedly told the undercover agent he had “no limits” and was interested in children “0+,” according to the criminal complaint.

“The conduct alleged against Joel Davis is as unfathomable as it is sickening, and as this case demonstrates, law enforcement will keep its watchful eye on the darkest corners of the internet to bring predators to justice,” interim US Attorney Geoffrey Berman said in a statement.

A Columbia spokesman told CNN: “We share the view expressed by the US Attorney's Office that the allegations in this matter are unfathomable and deeply disturbing.”