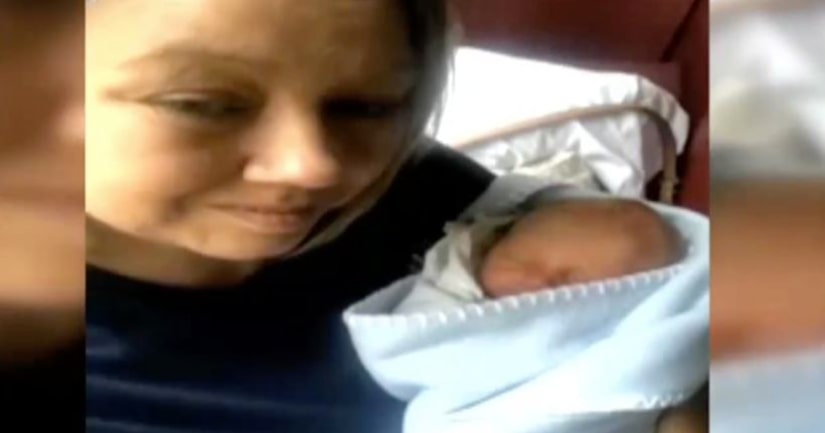 When Dawson's grandmother and aunt came to visit him at the hospital two days after he was born, they didn't see the resemblance.

"They're over there saying how he doesn't have none of my features, and his eyes are blue when they were brown yesterday, so we're like, 'Aww man, he looks like me, I can't believe you don't think he looks like me,'" Arnold Perry Jr. said.

Dawson's father said he and his wife never really got a good look at their baby, who was in the arms of his relatives.

"Well, I open up the drawer because I'm going to feed him. I'm thinking he's hungry, so I open it and see all kinds of onesies and things that ain't mine," Arnold Perry Jr. said.

After several minutes of confusion, he said a nurse walked in the room with his baby. The baby they had spent the morning with was not Dawson Perry but Colton Perry, born just one day after.

"When I went in the nursery, he wasn't in there. They come back and checked the number on my bracelet, checked his number. It was the wrong number. They said they may have had a number screwup," said Heather Perry, Colton's mother.

Heather Perry was told Colton had been spending time with the wrong family, and she was under the impression the visit had only lasted about 30 minutes - not the nearly two hours Arnold Perry Jr. said he remembers.

"So everybody's jaw hit the floor. People's crying. People's mad, just all kinds of mixed emotions, and it was just one terrible accident that could've been a tragedy," Arnold Perry Jr. said.

"I didn't know he was in there long enough and to hold, take pictures, videos and everything else. And when they brought him back, they had marked out my room number on his card and put theirs," Heather Perry said.

Both parents agree, the mistake of failing to check each baby's number is unacceptable, but they're relieved the result wasn't worse.

FULL STORY: Wrong newborn given to parents in WV - WMBF