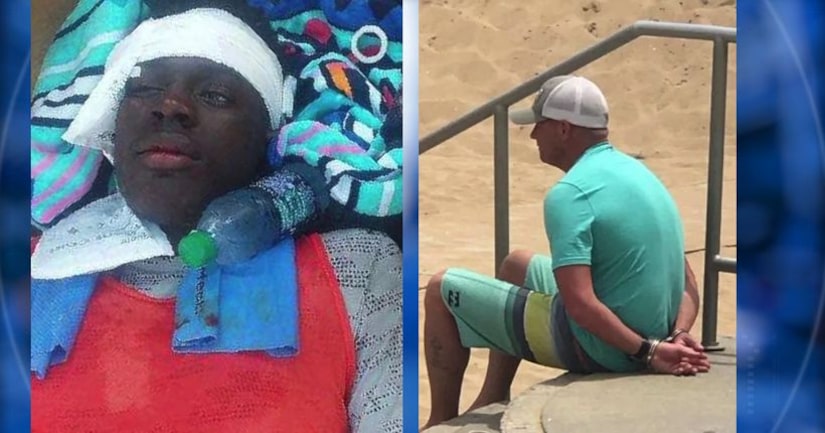 CHESTER, Va. -- (WTVR) -- A 14-year-old boy is recovering after he was assaulted by the father of an opponent during a large soccer tournament in Virginia Beach, according to the victim's family.

The Vickerie family from Chester traveled to the Oceanfront to watch their son, Timothy, play in the North American Sand Soccer Championship (NASSC) last weekend.

The tournament draws more than 10,000 players and hundreds of teams to the area.

"It's a fun weekend and something we look forward to. It's our second year doing it and we were looking forward to it," Timothy Vickerie explained.

However, during the end of a close 5-4 game dozens witnessed the Vickerie's son and an opponent fight for a ball on Saturday.

Jennifer Moss, who traveled to the tournament from Bon Air with her son, was watching the game from the sidelines.

"They were grabbing each other and it was certainly getting grabby," Moss stated.

During the altercation, a father from the sidelines ran past Moss and onto the field.

"He ran past me, grabbed the victim, and threw him on the ground face-up. Then, he punched him at least two to four times that I saw," Moss witnessed.

It took several men to pull the attacker off the teenager, according to witnesses.

"The next thing I knew, 10 other dads had to wrestle him down," recalled Moss who called 911. "I was shaking. It was so shocking. I was in such disbelief. I couldn't believe what I saw."

The senior remembered seeing his attacker in his peripheral vision.

The Vickerie's stated they were concerned about their son's well-being and finding the suspect.

"When I got to my son, he was bloody. His right eye was completely swollen, he was kind of in a daze, shocked and confused by everything," the teen's mother, Sharonda Vickerie said.

Timothy was rushed to the hospital and was diagnosed with a mild concussion while receiving several stitches in his face.

He's out on bond and is expected to be arraigned June 20. No one answered the door at Grinnell's residence for comment, Friday afternoon.

"[Grinnell] tried to apologize, but we weren't interested in that," the boy's father, Timothy Vickerie, recalled after an officer led Grinnell away in handcuffs.