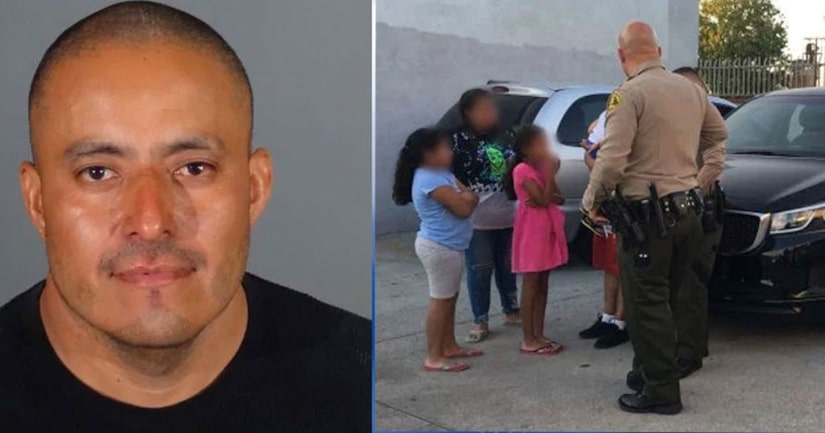 LOS ANGELES -- (KTLA) -- An alleged fake police officer accused of “terrorizing” a family as they enjoyed a meal in the City of Industry was taken into custody after a quick-thinking mother's actions led to his arrest, the Los Angeles County Sheriff's Department said Monday.

While heading home from a water park, the family of six -- two parents and their four children -- stopped to get food at a taco truck around 6:30 p.m. Sunday in the 13400 block of Valley Boulevard, according to a sheriff's news release.

While eating in their parked minivan, they were approached by a “dangerous stranger .... who began to intimidate and terrorize” them, the release stated.

He allegedly showed them a gun concealed in his waist band and flashed a badge, telling them he was an undercover “cop,” authorities said.

But the mother instinctively knew the man was not a police officer.

Fearing for her family's safety -- at that point, the armed stranger was just inches away from her son, a toddler who was still buckled in his car seat -- she quickly devised a plan to get him away from her husband and children, according to the release.

The mother offered the man one of their street tacos and explained she needed to go back to the food truck to get him some napkins.

She walked over and approached the taco truck and customers in line, at first telling them not to look back at her minivan. The woman then explained the situation, and they immediately called 911.

Within minutes, deputies from the sheriff's Industry Station responded to the scene and located the suspect next to the family's van. As the patrol cars closed in on the vehicle, the man allegedly threw the gun into the minivan and attempted to get inside.

Before he was able to do so, however, deputies managed to detain him, according to the release.

The suspect, identified as 38-year-old Juan Rodriguez, was handcuffed and taken to the Industry Sheriff's Station, officials said. He was booked on suspicion of felony child endangerment, impersonating a peace officer and outstanding warrants.

The Sheriff's Department credited the “brave” mother and her “taco tactics,” as well as “alert” community members for actions that led to the man's arrest.

“We want to thank the community members who immediately called law enforcement to report the suspicious activity,” the release read. “We want to give a shout out to the brave mother whose momma bear instincts kicked in and she was able to deescalate the situation, plan a distraction and found a way to get deputies to her location immediately.”

The incident remains under investigation, and anyone with information is asked to call 626-330-3322. Those who would like to remain anonymous can leave a tip through “Crime Stoppers” by dialing 800-222-8477.