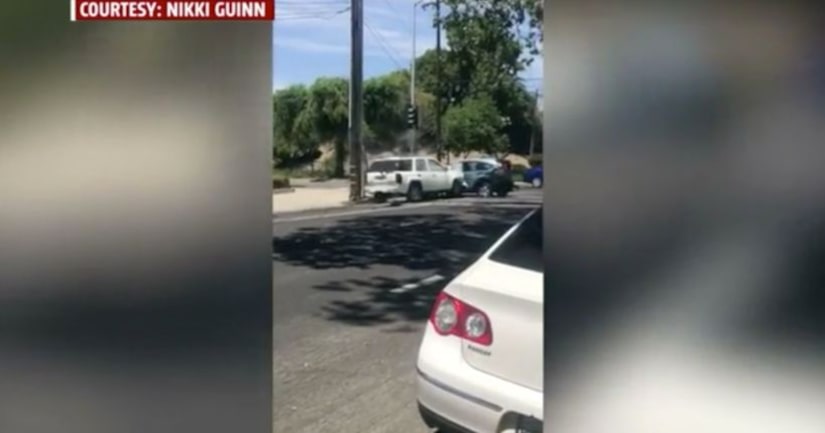 DOWNTOWN SACRAMENTO, Calif. -- (KTXL) -- Cell phone video captured Monday shows a driver repeatedly ramming his SUV into another car before kicking and stomping on the vehicle on 10th and X streets.

It all started with a crash loud enough for Nikki Guinn to run outside of her home near X Street in Downtown Sacramento.

"I was inside my house and I heard a car accident," Guinn recalled.

But she soon realized it was no accident.

"So I grabbed my phone and ran outside with it," she said.

Her cell phone camera captured 12 minutes of chaos. In the footage, a white SUV can be seen plowing into a blue car over and over again.

"I was actually really scared," Guinn said. "It felt unreal to watch it"

When the car can't move anymore a man, now identified as 40-year-old Jose Garcia Alvarez, gets out and is seen stomping and kicking the blue SUV.

An ambulance shows up then a Sacramento Police patrol car moves in. Officers kept their distance at first.

"I think our officers acted heroically in this they were very patient," said Sacramento Police Sgt. Vance Chandler.

Chandler says it started as road rage incident on the Capital City Freeway near 5th Street.

"A caller called us advising that there was another driver behind them and they had been rammed by that driver," Chandler said.

Police say after Alvarez rammed a moving car he focused on the blue car.

At one point, he falls off the car and that's when officers move in and detain him.