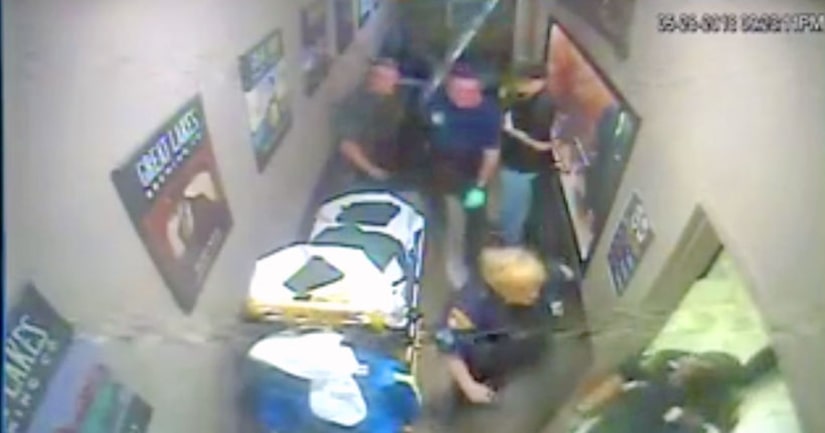 CLEVELAND -- (WJW) -- Investigators say a woman tried to hide in the ceiling at the Grayton Road Tavern and wait until the bar closed, but she was caught before she carried out her plan.

The tavern is home of the popular Queen of Hearts game, but the notoriety of the game has also attracted the attention of undesirables.

"People just I guess assume that we have $5.5 million stashed in our walls here; that is clearly not the case," said Jennifer Natale, general manager.

"So last night I got a phone call that we had a female come into the ladies room and somehow ended up climbing up into the ceiling. When I got here, a couple of ceiling tiles were on the ground; the vent was hanging," James Page, owner, told FOX 8.

Surveillance cameras were rolling as a woman went into the bathroom Monday night and climbed up into the ceiling, apparently looking for a place to hide until after closing time.

You see a tile from the drop ceiling fall as she crawled toward the kitchen. When employees realized someone was up in the ceiling, they called 911 and Cleveland police and firefighters responded and searched for the woman.

She is eventually found hiding in a small space above a cooler in the kitchen and is taken into custody.

"Not sure why you would be up there; it's about 120 degrees up there and probably about two hours so couldn't believe it," Page said.

Police told the owner of the tavern that the woman has a history of hiding in bars and restaurants and then stealing anything she can after closing time.

The truth is there is very little cash at the Grayton Road Tavern. "All the money, it's not on site. We take it off every night; it does not stay here, and the one safe that we do - with the little bit of cash that we do keep, it's a big safe; nobody is getting into it."

The owner said if the woman planned to tamper with the board and try and find where the Queen of Hearts was hidden, it was a plan doomed to fail. The board, which the tavern purchased from Nannicola bingo supplies, is sealed and certified, so that players can be confident that it has not been tampered with in any way.

"The one thing I will say if anyone tried to do that to our board, we would immediately cease our game. We would go ahead and get a new board from Nannicola and then we would just restart the game from there," Natale said.

Investigators said the woman has a serious drug addiction and steals whatever she can to support her habit. The owner of the bar points out they have someone watching the building 24/7 and they have many police officers who are customers.