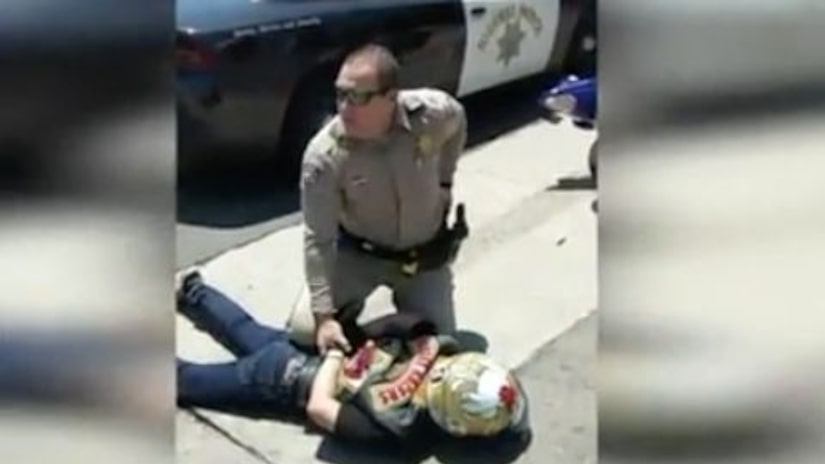 RANCHO CUCAMONGA, Calif. -- (KTLA) -- A California Highway Patrol vehicle appears to knock down a motorcycle rider in Rancho Cucamonga in a video streamed on Facebook on Sunday afternoon.

The incident, which happened on 19th Street near Carnelian Street shortly after 1 p.m., was livestreamed on a Facebook account for Sonia Villalobos. CHP officials have said the collision happened "for unknown reasons" following a pursuit along the 210 Freeway.

The man hit by the patrol vehicle has been identified by CHP as 26-year-old Raul Martinez.

A CHP officer had been pursuing him along the eastbound 210 Freeway, just west of Baseline Road, as he rode a blue 2016 Yamaha R6, officials said. Then, the pursuit went from the freeway to surface streets, which is when the Facebook video starts to capture the officer chasing after Martinez near 19th and Carnelian streets.

In the video, dozens of bikers are seen stopped at Carnelian Street when one motorcyclist comes into view traveling on 19th Street followed by a four-door Dodge CHP vehicle.

The CHP vehicle, which had its siren on, appears to swerve to the right, causing the rider to topple onto the ground.

The incident happened in the midst of a wide-scale motorcycle event advertised in a flyer published on, and since deleted from, Facebook by Sonia Villalobos. It described the gathering as memorial event called the "Fallen Brother Ride," organized by a group called Elite Bikerz Inland Empire.