SYDNEY -- (WGHP) -- “She wanted to be the envy of others,” said an Australian judge of Mélina Roberge. There's little to envy now: The 24-year-old was on Wednesday sentenced to eight years for drug trafficking, in a case that involved $20 million of cocaine, an exotic cruise, and social media.

Roberge and Isabelle Lagacé, 30, left Quebec and set sail on what by all appearances was a glamorous six-week cruise with stops in places like Bermuda, Peru, Chile, and Tahiti, which the women documented via Instagram (photos here).

But when they arrived in Australia on Aug. 28, 2016, sniffer dogs unearthed 30 kilograms of cocaine in their first-class cabin, reports the CBC. More than twice that amount was found in André Tamine's quarters; the 65-year-old Montreal man had invited the women on the trip.

The BBC reports it's the biggest drug seizure Australia has made on a commercial boat or plane. Judge Catherine Traill had harsh words for Roberge's desire to have an impressive social media presence, reports news.au.com: “She was seduced by lifestyle and the opportunity to post glamorous Instagram photos from around the world. It is sad they seek to attain such a vacuous existence where how many likes they receive are their currency.” The Times of London cites a court affidavit in which Roberge admitted to being “a stupid young woman” concerned with superficial things.

That may not have changed: The court heard that “her main hobby in prison is training at the gym.” Lagacé was sentenced to seven years and six months in November, and Tamine will be sentenced in October.

This article originally appeared on Newser: She Documented Her Exotic Trip on Instagram, Now Heads to Prison

FULL STORY: She documented her exotic trip on Instagram, now she heads to prison - WGHP 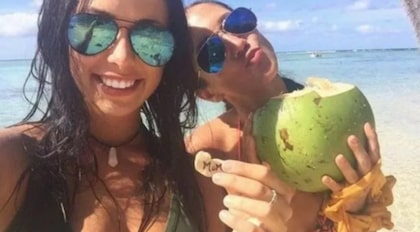 'Cocaine babe' says she smuggled drugs for 'likes and attention'