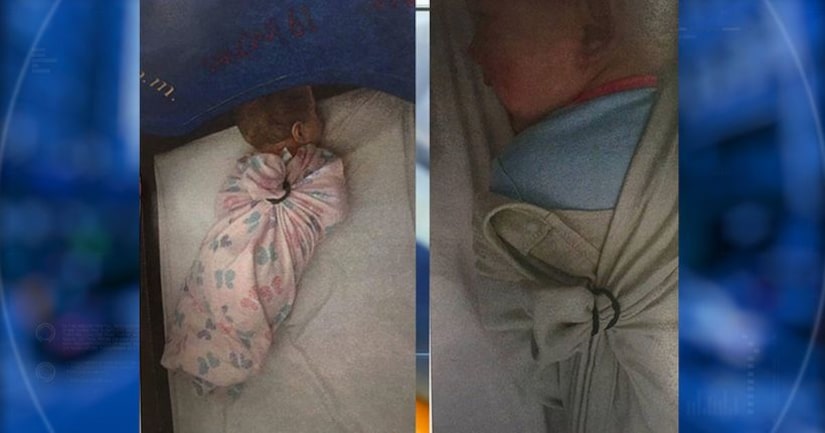 KANSAS CITY, Mo. -- (WXYZ) -- A mother is outraged after seeing a photo of her 7-month-old son tied up in a sleep sack at day care.

Tanya, who asked her last name not be used because of her job with the government, said she got phone call from the Kansas Department of Children and Families (DCF) in late March. The department told her it was investigating a report involving a photo of her son at Miss Anne's Daycare in Leavenworth, Kansas.

The DCF worker couldn't send her the photo, so Tanya drove directly to the DCF offices in Leavenworth.

“It was a picture of him in a sleep sack with his arms bound down and the sleeves of the sleep sack tied to the back with a ponytail holder, and he was laid face down with his face pretty much in the corner,” she said, shaking.

Tayna drove directly from the DCF office that day to the day care, picked up her son, and he hasn't been back.

Tanya said she's not really an emotional person, but the situation has been difficult.

She wasn't the only person to get a phone call.

Deirdre Engle said she got a call, too. Someone had reported her daughter, Elora, being put down the same way — in a sleep sack, face down, with the sack pulled tight with a hair band. Engle said DCF had a photo and was investigating.

“First, I thought there's no way that's my baby, she looks so small! She's laying on her tummy like she always does, but she looks uncomfortable. She's tied up. My baby is tied up," Engle said in a phone call. "She can't roll over, she can't sit up, if she were to cough up any of her formula, she'd choke. I got scared for her. She's been at this day care since she was 5 weeks old. I've trusted these people for her entire life and I was wrong,” wrote Engle.

Engle pulled her daughter from the day care March 27. She has not taken her child back to the facility.

Another mother, Jennifer New, also got a call from DCF in late March. According to her, DCF assured New her daughter wasn't in any photos they'd received, but they wanted her to check on things and report back.

When reached for comment, Miss Anne's referred Scripps station KSHB to a statement they'd posted on Facebook earlier in the day on April 17.

The Department of Children and Families said it could not comment specifically on investigations.

However, DCF did say it follows the American Academy of Pediatrics recommendation that babies be put to sleep on their backs.

The Kansas Department of Health and Environment released the following statement:

“KDHE's Child care licensing protocol for investigating complaint allegations does involve contacting parents of children in care (as well as facility staff and other potential witnesses) when allegations and concerns relate to child care practices and/or the care and supervision of children. This does not mean every parent will be contacted, as contacts are made for the purpose of determining compliance vs. notifying parents an investigation is underway.

Also, please note that although the agencies conduct joint investigations, the DCF investigation is separate from a KDHE child care investigation. We are looking at different laws/regulations and applying different protocol.”

Tanya said she'd done everything to keep her son safe. She thinks too much time passed between the initial report and when families were told.

“I should've immediately got a phone call,” she said.