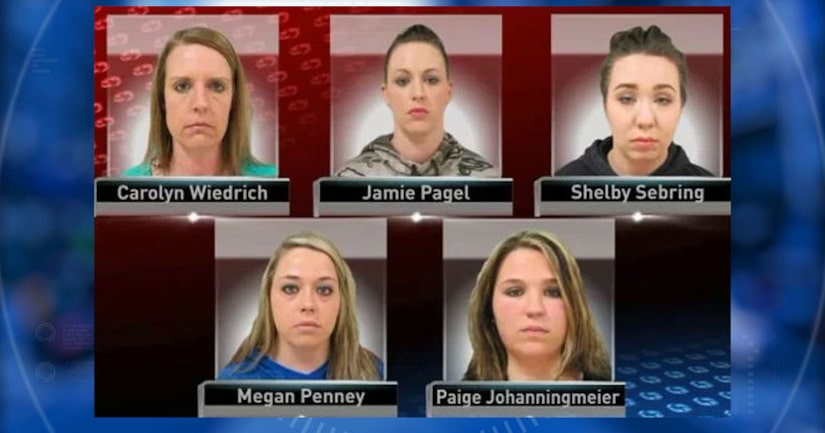 IOWA -- (KTLA) -- Three more former employees at a northeast Iowa care facility are accused of having sex with patients, according to the Fayette County Sheriff's Office.

All five are charged with sexual exploitation by a counselor or therapist, a felony, KTLA sister station WHO in Des Moines reports.

The five are accused of having sex with patients while working at Prairie View Residential Care Facility in Fayette between 2015 and 2016. The facility cares for patients with chronic mental illness, intellectual disabilities, or medical conditions.

Officers arrested 23-year-old Paige Lynn Johanningmeier and 26-year-old Megan Marie Penney in early March. The investigation, which began in February, revealed that other workers at Prairie View had also had inappropriate contact with patients.

Officers arrested three other former employees who "had been discharged in the past for unhealthy relationships with patients," according to a release from the sheriff's office. Carolyn Marie Wiedrich, 44; Shelby Mariah Sebring, 24; and Jamie Leah Pagel, 32; "had sexual relationships" with patients while working at the facility, the release states.

“These CNAs have violated the trust of not only their employers, but also the families of these patients who put their trust in these individuals to care for their family members," said Sheriff Marty Fisher.

The investigation began in February when two court ordered patients went missing from the facility, eventually leading authorities to discover the patients' relationships with the nursing assistants, according to the Waterloo Cedar Falls Courier.

Wiedrich, Sebring and Pagel were booked at Fayette County Jail and later posted a $10,000 bond. The investigation at Prairie View is ongoing, the sheriff's department said.