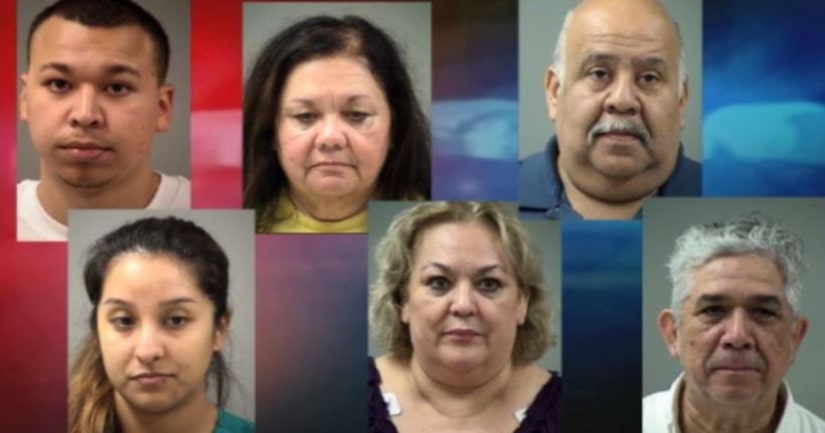 SAN ANTONIO -- (WLOS) -- Eleven people were arrested at a West Side home on animal cruelty charges.

Bexar County Sheriff's deputies say the animals were being sacrificed as part of a religious ritual.

A woman on the scene would only tell WOAI it's a misunderstanding. She wouldn't elaborate on why sheriff's deputies entered to find the group slaughtering goats and birds and pouring their blood into containers.

Sheriff's deputies responded to a report of animal cruelty on Bronze Sand Street Friday around 7 p.m.

“They found inside goat's heads, chickens ... and it was obvious they were performing some kind of ritual," said Sgt. Elizabeth Gonzalez.

Gonzalez said 12 to 14 people were arrested on charges of animal cruelty to non-livestock animals.

Bexar County Animal Control hauled away bags of dead animals, as well as a goat that was still alive and bleating loudly.

The next day, birds could still be seen roosting in a tree in front of the house. Containers deputies say were used to collect animal blood were also visible, as well as an egg on the front sidewalk and a piece of a dead animal that had been thrown on the roof.

A couple briefly emerged from the home but had little to say.

“Has there been a misunderstanding here with what's been going on? Can you give us any insight as to what was happening?” Avila asked.

A woman who did not identify herself stood in the front doorway and responded, “Yes, there's a misunderstanding but we're not going to talk about it."

The woman indicated a lawyer had advised her not to speak further.

As for the neighbors, there was a mixed reaction. A man across the street said he respects his neighbor's religious beliefs, even if they include sacrificing animals.

Another neighbor called it mutilation and cruelty.

“It's a living creature. If you're not going to eat it after you kill it, there's really no point to doing it," said Antonio Jimenez.

Neighbors closest to the home didn't want to talk on camera but said large numbers of people would come to the house for the rituals, often dancing around a fire in the backyard.

Another neighbor joked, "I'm pretty sure that's against HOA rules."