The internationally revered stylist and cosmetologist was ambushed on the patio of his Southern California home and viciously stabbed to death on January 23, 2017.

After the gruesome murder, the killers ransacked the house, attempted to wipe down the crime scene and took off in Fabio's Porsche.

Fabio's longtime wife Monica was inconsolable. Or was it all just a convincing act?

Kristin Woolever was just one of them.

"I was brand new to the industry and he just welcomed me with open arms and always had our back, and he was there for us to succeed," said Woolever.

But something besides his work was Fabio's top priority.

"Fabio was a family man," said Woolever. "He was so proud of his daughters, he was proud of his wife, he loved family first. He loved his wife."

Fabio didn't have an enemy in the world, so when he was found lying dead in his own home, police were stumped. All they had was some blood evidence, and no clue who it belonged to.

Five months after Monica buried her husband, there were still no arrests for his murder. She accepted a lifetime achievement award on her late husband's behalf, still appearing broken.

But cops believe it was Monica who should have been receiving an award that night -- for best portrayal of a grieving widow. Because not long afterward, cops identified that blood evidence, tracing it to Robert Louis Baker, a convicted sex offender who served time for raping his underage stepdaughter.

According to police, Baker cut his finger during the attack, which connected his DNA to the crime scene. Police say they have surveillance footage of Baker and an unknown assailant fleeing the murder scene. It turns out Baker was having a secret affair with Monica Sementilli.

In a nine-page indictment obtained by Crime Watch Daily, the crime, as the grand jury saw it, is laid out in glaring and shocking detail, first accusing Monica of hiring professionals to connect her cellphone to her home surveillance system so she could monitor her husband's location. She allegedly forwarded an email containing her security password to her lover Robert Baker.

According to the indictment, the couple live-streamed the home security cameras from their cellphone while simultaneously FaceTiming. The alleged murderess cleared the house of her children so that there would be no witnesses present for the murder. Police say while Fabio Sementilli was being murdered, Monica went shopping to give herself an alibi. Monica allegedly waited until her youngest daughter came home so she would be the first to discover her father dead.

If convicted, they could face the death penalty. The grand jury cited the special circumstances of lying in wait and murder for financial gain. Both Monica Sementilli and Robert Baker have pleaded not guilty.

Police desperately need the public's help in identifying the unknown co-conspirator. Detectives are seeking information that will help identify a third suspect, a male with a stocky build, standing about 5' 6" to 5' 7", wearing a hooded sweatshirt.

Anyone with information regarding this crime is encouraged to contact Detective Barry Telis or Chris Gable, LAPD Robbery-Homicide Division, Homicide Special Section, at (213) 486-6890. During non-business hours, calls should be directed to (877) LAPD-24-7. Anyone wishing to remain anonymous should call Crime Stoppers at (800) 222-TIPS. Tipsters may also contact Crime Stoppers by texting to 274637 with a cellphone. All text messages should begin with the letters "LAPD." Tipsters may also go to LAPDOnline.org. 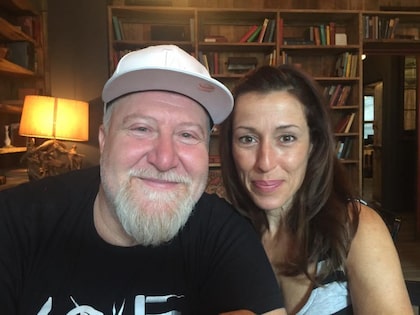