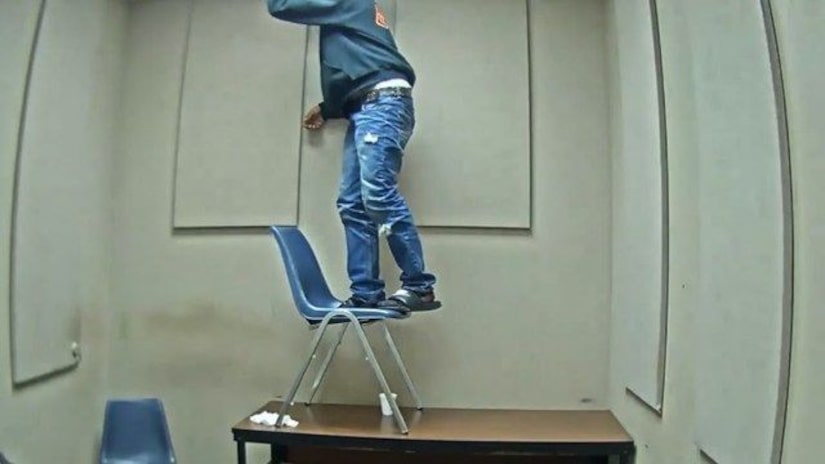 OMAHA, Neb. -- (WBBH) -- The story unfolds inside an interrogation room on the third floor of Omaha Police headquarters.

The Douglas County Attorney provided the video of the two-hour incident in October 2017 involving Thomas Hartman.

"You're Thomas Hartman, and you filed a report yesterday?" the detective asked.

Hartman, 25, first filed a report with police saying he was the victim of a crime. He said his brother robbed him. But detectives did their homework.

"You just need to come clean, because I have visuals of him from the time of this robbery. He's on the other side of town," the detective told Hartman.

While charging Hartman with false reporting, his 17-year-old girlfriend was in another room talking with detectives about sex-trafficking.

The video shows Hartman knocking and banging on the wall and yelling for his girlfriend.

At one point, you hear a woman yell, "What?"

Hartman yells, "I think they're going to take me to jail. Go get that money and bond me out Jaylene."

According to a police report, the teenager told detectives she was doing sexual favors in exchange for money under Hartman's direction.

"We'll charge you with a different crime, disturbing the peace," One officer said.

"Because you are disturbing our peace and disturbing other victim's peace. You don't need to be yelling."

Ninety minutes later, the video shows Hartman stacking a chair on the table, climbing on top and messing around with the ceiling tile.

Officers catch him in the act, and they wonder if he's trying to escape.

One officer told Hartman that was a "stupid move."

"You're at the frickin' police station, man and you put a chair up and tried to get in the ceiling," the officer said.

It turns out Hartman wasn't escaping; he was hiding something.

The officer didn't see it when he searched the ceiling, and it's easy to miss.

A white ball falls out when the officer lifts the ceiling tile. He found someone's else wallet up there. But did not see the cocaine in the ceiling fall to the floor.

It wasn't until the technician straightened up the room when she discovered the drugs on the floor.

Prosecutors ended up charging Hartman with drug possession. A judge sentenced him to nine months probation.

Hartman is currently being held at the Nebraska Diagnostic and Evaluation Center in Lincoln for drug charges and terroristic threats.