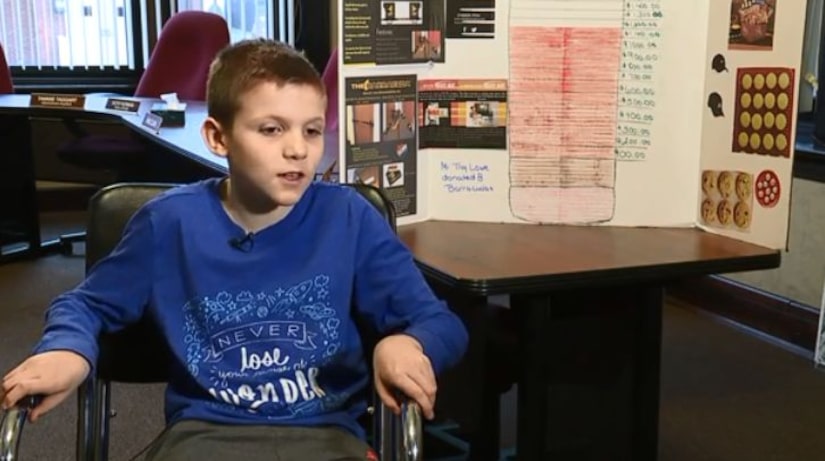 DENNISON, Ohio -- (WJW) -- After a lockdown at 10-year-old Kohlton Calvey's school, Claymont Intermediate, Kohlton told his mom that he wanted to do something to make his school safer.

Claymont Intermediate is located in Tuscarawas County and is part of the Claymont Local Schools district. The lockdown at Kohlton's school was a precaution and no students were injured.

“My heart's breaking because I'm just thinking, what is going through a child who is ten years old -- is thinking about, 'I have to be safer at school',” said Kohlton's mom, Elaine Zurcher.

Kohlton and his mom found the Barracuda Defense System by Ohio-based Silverback Safety & Training Solutions. The Barracuda is a barricade that can be secured under a door in just a few seconds.

At first, Kohlton wanted 16 of them for his school, but after the recent shooting at a high school in Parkland, Florida, Kohlton told his mom they should be in every classroom in his district.

“He feels like we need to do something to make it safer everywhere and the best place to start is in my own community,” Zurcher explained.

Troy Lowe, CEO of Silverback, has a background in the military and law enforcement. He invented the barricade about four years ago. It is currently in several schools as a layer of security.

The barricades cost about $129 each and can be used on a door that opens inside or outside. Lowe says it will save teachers time when they are told to shelter in place and barricade the door.

“You're not having to stack desks and chairs and tables. You're quick; you're safe. It's a layering option,” he said.

Lowe says the barricade is intended to distract the shooter, delay his efforts to move throughout a building and give police more time.

“It will frustrate the attacker so much that he'll just move on and if he keeps moving on then the good guys will show up and stop the threat,” Lowe explained.

Kohlton is also raising money for trauma kits to go along with the door barricades. Lowe plans to come to the school and train teachers and administrators on how to give immediate first aid.

“The trauma kit doesn't have to be for an active shooter, anybody that gets hurt this is going to benefit so given any medical situation this would help,” said Dennison Police Officer Andrew Keller.