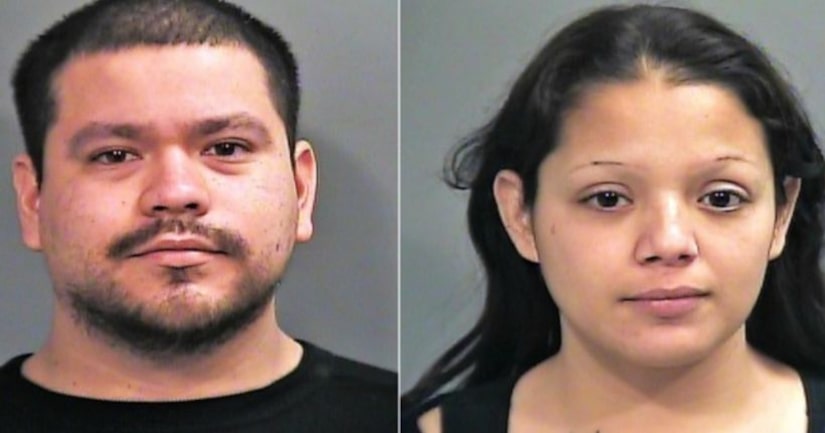 FAYETTEVILLE -- (KLRT) -- A local woman and her live-in boyfriend face a string of charges after police say her 8-year-old son was found to have suffered abuse including starvation and being handcuffed to furniture.

Melissa Miranda, 33, and Josue "Joey" Tovias have been jailed since Jan. 26.

According to arrest documents, Miranda has four other children aged 17 to 5 and is pregnant with another.

The documents describe in great detail what investigators say the child had suffered. Police say he had injuries described as starvation, and laceration to his right wrist.

The investigation began last week after an employee of the Arkansas Department of Human Services (DHS) came to the Fayetteville Police Department's Criminal Investigations Division to discuss a hotline report stating the boy had been handcuffed to a chair in the living room since the beginning of January. On Jan. 24, a police detective reported that he saw the child with a scabbed injury on his right wrist that was consistent with someone applying pressure to a handcuff while wearing it.

During the initial investigation, police say allegations surfaced that the victim was being starved and that Miranda was jealous that her mother loved the victim more than she loved her. This was said to be the reason for the victim being singled out from the other children.

On Jan. 25, the same detective interviewed staff at the boy's school. Numerous staff members told police the victim's physical appearance had significantly changed since Nov. 2017. They said his eyes and cheeks became sunken and his skin tone changed. He also became very emotional when eating, hoarded food, and stole food from other students. As a result, an alternate eating schedule had been made by the school on the victim's behalf in order to accommodate his extreme hunger. The staff also noted that the boy began experiencing incontinence frequently while at school and said even when he was not wet with urine he smelled strongly of it.

Police say that when the staff called Miranda and Tovias, to remedy the situation, they were very defensive and at one point said the victim would just have to spend the day sitting in the nurse's office. They also resisted requests to bring the victim clean clothes.

The four youngest siblings were taken to the Child Safety Center for interviews, but no disclosures were made. Investigators asked the victim and his 5-year-old brother to remove their shirts and the 5-year-old appeared healthy but the victim had a distended stomach and the bones in his chest/ribs were visible and his arms were extremely skinny.

On Jan. 26, Miranda and Tovias complied with a request from investigators to take the victim for medical screening for malnutrition and other forms of abuse. During that time, Miranda's 17-year-old daughter gave the detective an audio recording from Jan. 13 of her mother disciplining the 8-year-old.

In the recording, Miranda was extremely irate, aggressive, vulgar, and loud, the report stated. She was mad because the victim stole candy. She threatened him, saying "I'll cut you" and threatened to abandon him in the cold and to have him arrested for stealing candy. The detective reported hearing sounds of something being struck repeatedly. She was heard speaking to Tovias, which indicated he was there when this was happening, police say.