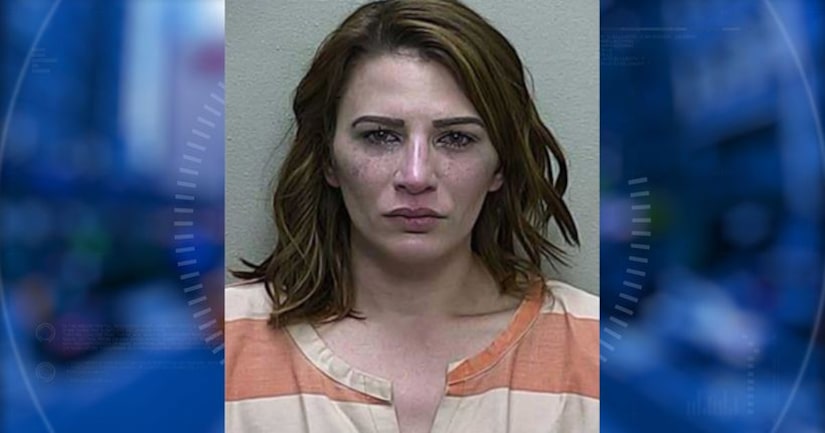 MARION COUNTY, Fla. -- (WKMG) -- A woman is facing charges after she led authorities on a high-speed chase while driving a stolen vehicle with a baby in her arms, according to the Marion County Sheriff's Office.

Deputies said the chase began late Thursday when a Dunellon police officer tried to pull over the woman, identified as Shelly Carbonara, 27, for speeding in a silver Ford F150 truck with a Tennessee tag.

The officer turned his emergency lights on and pursued Carbonara, who continued speeding east on Highway 484, deputies said.

Marion County deputies were notified about the chase and responded to the scene to assist, according to an arrest affidavit.

While approaching Highway 484 and State Road 200, a deputy saw the truck turn around and head back west on Highway 484, the affidavit said. The deputy then activated their lights and joined the chase, but Carbonara made no effort to stop, according to the deputy.

When Carbonara eventually turned around again to head east, the deputy said they saw a dark-colored SUV that was believed to have a connection to Carbonara because the driver refused to yield to authorities' emergency lights, the affidavit said.

The truck eventually approached the intersection of Highway 484 and State Road 200, where an officer used stop sticks to disable the front of it, deputies said. While the truck and SUV turned southwest onto State Road 200, deputies used a precision immobilization technique to completely end the chase, according to the affidavit.

When a deputy approached the truck, Carbonara was holding an infant and told authorities she was scared because she had a suspended driver's license, the Sheriff's Office said. Deputies later found that her license has been suspended since September 2010.

Deputies also learned that the truck was stolen out of Knoxville, Tennessee, the affidavit said. When they asked Carbonara about it, she told deputies she didn't know it was stolen, authorities said.

Carbonara was arrested and booked into the Marion County Jail Friday morning, according to the affidavit. She is charged with one count of resisting an officer by fleeing or eluding law enforcement with lights and sirens active, one count of child neglect without great bodily harm, one count of grand theft of a motor vehicle and one count of knowingly driving on a suspended license, the affidavit said.

Deputies did not say whether the driver of the SUV was stopped or taken into custody.