KSWB reports a civil case regarding the death of 32-year-old Rebecca Zahau, whose bound and nude body was found hanging from a balcony at a historic Coronado mansion more than seven years ago, has been dismissed with prejudice.

Last April, a jury found Adam Shacknai, the brother of Zahau's boyfriend Jonah Shacknai, liable in her death and awarded her family $5 million, despite a law enforcement ruling that her death was a suicide. Wednesday's dismissal vacates the jury's verdict due to a settlement reached between her family and insurers, for an undisclosed sum, KSWB reports.

“There is no legal judgement, which is how it should be, saying that Mr. Shacknai did anything wrong. It's as if that never happened," said Seth Weisburst, Shacknai's lawyer in the lawsuit. Even so, Shacknai is angry with the outcome, because it deprives him of the opportunity to clear his name in court, Weisburst said.

The terms of the settlement were not made public, but the Zahau family's lawyer, Keith Greer, confirmed that the settlement vacated the judgement in the civil case and precluded the family from taking further legal action agains Shacknai. "The civil case is done," Greer said.

"The Sheriff's Department has continually indicated its willingness to reevaluate the Rebecca Zahau case if new evidence was presented. After a productive conversation with the family's attorney, Keith Greer, Sheriff Bill Gore determined that, while no new evidence was presented, new analysis of existing evidence was presented in the recently concluded civil trial. In the spirit of transparency and open-mindedness, we have agreed to undertake a fresh review of the case, by investigators who have had no prior involvement with the case, to evaluate the new information. Without having the materials and reports from the civil attorney in front of us at this time, it is difficult to say how long this review will take; however, we expect it will take at least 90 days.

"When our investigation is complete, we will meet with the family's attorney to discuss our findings. Ultimately, the cause and manner of death, in any case, is determined by the Medical Examiner. In San Diego County, the Medical Examiner's Office is an independent entity and separate from the Sheriff's Department." -- Capt. Mike McClain 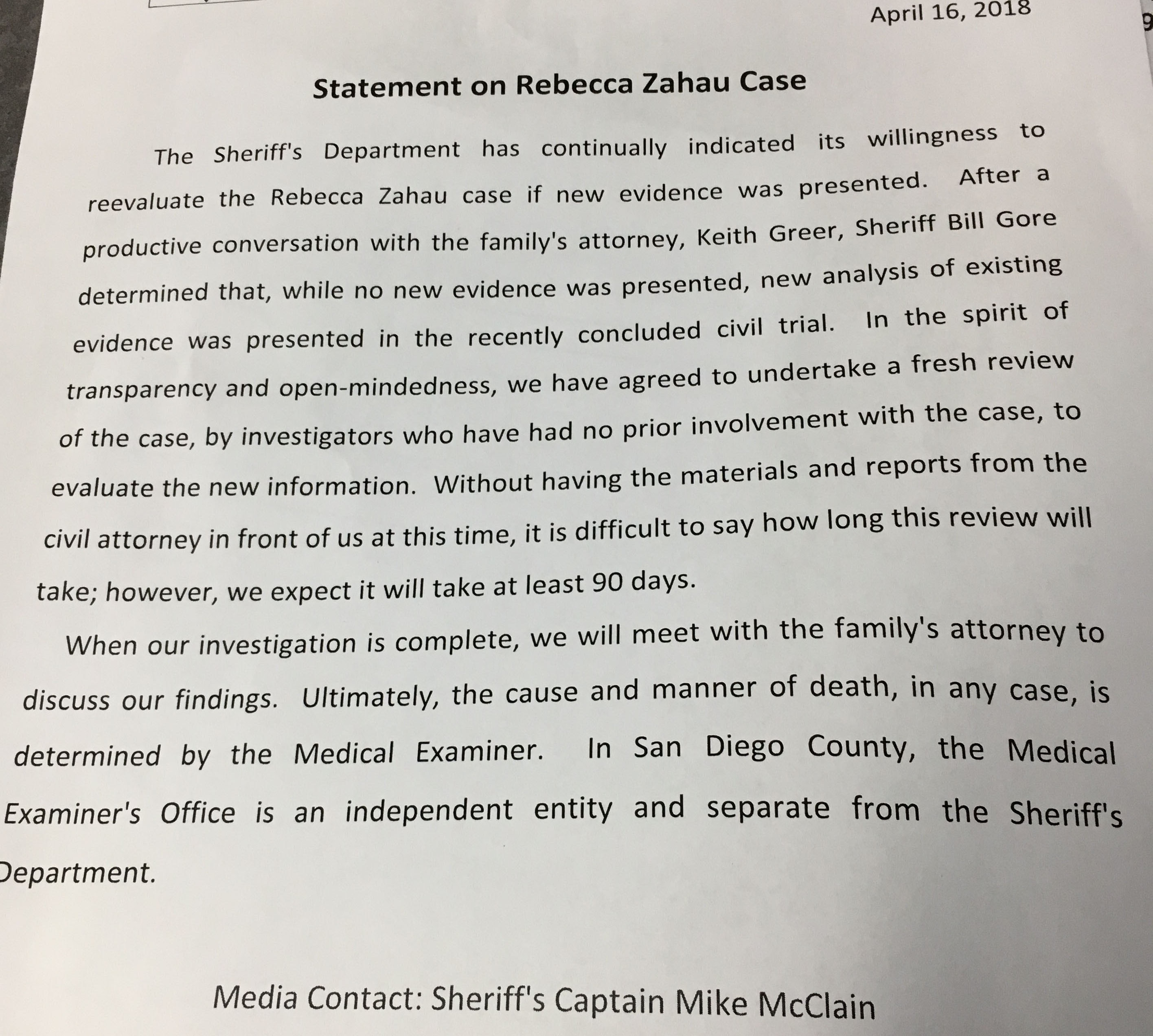 KSWB-TV reports a San Diego jury Wednesday awarded more than $5 million in damages in a civil trial to the family of a woman who authorities said committed suicide by hanging herself at a Coronado mansion in 2011, determining that the brother of the woman's boyfriend was liable for her death.

Rebecca Zahau, 32, was found dead the day after her boyfriend Jonah Shacknai's 6-year-old son Max Schacknai fell from a second-story landing at the mansion. The boy died five days later.

Some big developments in a high-profile death. Did grief drive a young woman to take her own life -- or was it something else?

It's a story that crashed the shores of Coronado Island like a tidal wave: A young woman found hanging at a multimillion-dollar mansion. Suicide? Or something darker?

Now the dead beauty's family has a date next month in civil court. They say they've got new evidence that Rebecca Zahau was murdered.

Rebecca Zahau, 32, was living a storybook life. She was dating fabulously wealthy pharmaceutical magnate Jonah Shacknai. The couple often vacationed in sun-kissed comfort at Shacknai's $15-million estate near San Diego, California. But those good times would quickly tumble into tragedy.

In July 2011, Zahau was alone with Shacknai's 6-year-old son Max at the estate.

"So Max is at the mansion, he's being watched by Rebecca. At one point she was taking a shower. All the sudden there's a thump and a crash," said KSWB-TV FOX 5 San Diego anchor and reporter Phil Blauer.

Blauer says police reports reveal the young boy fell down the mansion's staircase, plummeting headfirst to the floor below. Max's injuries were grave, including massive trauma to the brain.

"Because of his serious injuries, Max is put into an induced coma. The family is at his bedside around the clock hoping that he can improve," said Blauer.

"It's believed that she received a voicemail from Jonah Shacknai saying that Max's condition wasn't getting any better," said Blauer.

Hours after that phone call, tragedy becomes absolute terror. At 6:30 the following morning, on July 13, 2011, Jonah's brother Adam emerges from the estate's guest house to a spine-chilling sight: It's Rebecca Zahau, dead, her naked body swinging by a taut rope from the main house's balcony.

"She bound her feet, placed the rope and the shirt around her neck, fashioned her wrist bindings, and secured her hands behind her back. Rebecca moved out to the balcony, leaned forward over the railing and fell," said San Diego County Sheriff's Sgt. Dave Nemeth.

"Adam Shacknai runs to the kitchen, grabs a knife from a butcher block and then cuts her down. He immediately begins to give her CPR, but it's too late," said Blauer.

Inside, investigators are met with more horror.

"The rope around her neck stretches up over the railing and is tied to a bed frame inside the bedroom," said Blauer.

And painted on the bedroom door is a cryptic message:

After seven weeks of investigation, detectives come to a grim and they say unavoidable conclusion: Rebecca Zahau's death was a suicide.

"Police believe that she was distraught over Max's worsening condition," said Blauer.

But Zahau's family attorney Keith Greer believes a number of clues at the scene might indicate otherwise.

"Binding her ankles together, binding her hands behind her back, gagging her and putting the noose around the neck, that all in and of itself doesn't make sense," said Zahau family attorney Keith Greer.

They've filed a wrongful death lawsuit against the man who says he found Zahau swinging from a rope, Jonah Shacknai's brother Adam. The family alleges Adam Shacknai didn't merely find Zahau, they allege he killed her.

"She was actually strangled and killed before she was hung off the deck," said Greer.

Greer says it's all in DNA evidence on the knife Adam Shacknai used to cut down the body, a knife stained with Zahau's blood.

"It was all the way around the knife, all four sides," said Greer. "She was violated by the handle of the knife that was inserted into her."

It's a stunning allegation, but it's not supported by the autopsy report, which concluded there had been no genital trauma.

But what about that cryptic message painted on the bedroom door? Greer says that's not something Zahau would write. In fact a handwriting expert hired by the family tells Greer it's his opinion the letters aren't even in Zahau's hand.

The family lawsuit maintains that Adam Shacknai assaulted Rebecca Zahau, then murdered her and staged a suicide to cover his crime.

Adam Shacknai has denied all of the allegations. And the San Diego County sheriff says the investigation remains concluded as a suicide.