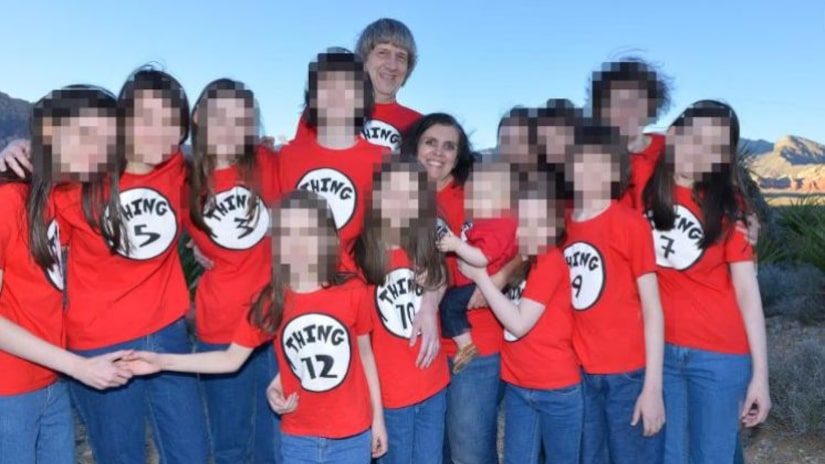 RIVERSIDE COUNTY, Calif. -- (WGN) -- For years, the 13 starving children lived in squalor, shackled with padlocks while their parents taunted them with pies left on the counter of their California home, authorities say.

David and Louise Turpin lived with their children between ages 2 and 29 in Perris, southeast of Los Angeles.

What started as neglect escalated into years of horrific torture, authorities said, with the parents allegedly depriving the children of water and feeding them small portions of food on a strict schedule.

They'd sleep during the day and stay awake at night, sometimes chained to their beds and not allowed to use the restroom, according to authorities.

After years of alleged abuse, one teenage girl escaped Sunday and called 911. Investigators went to the house and freed the children, prompting days of investigations that led to a series of charges Thursday.

“As a prosecutor, there are some cases that haunt you,” Riverside County district attorney Mike Hestrin said Thursday. “Some deal with human depravity, and that's what we're dealing with here.”

Here's what we know:

David and Louise Turpin are both from Princeton, West Virginia, relatives say. Of their 13 children seized from the home, six are minors.

The reclusive family has lived in their suburban Perris neighborhood since 2014, but neighbors said they didn't see them much.

Neighbor Kimberly Milligan said one of those rare encounters occurred in 2015 and especially stood out.

Milligan said she was checking out Christmas decorations on nearby homes when she saw the older Turpin children putting up a Nativity scene outside their house and complimented their decorations.

“They just froze,” Milligan recalled. “They immediately shut down. You could tell they were terrified.”