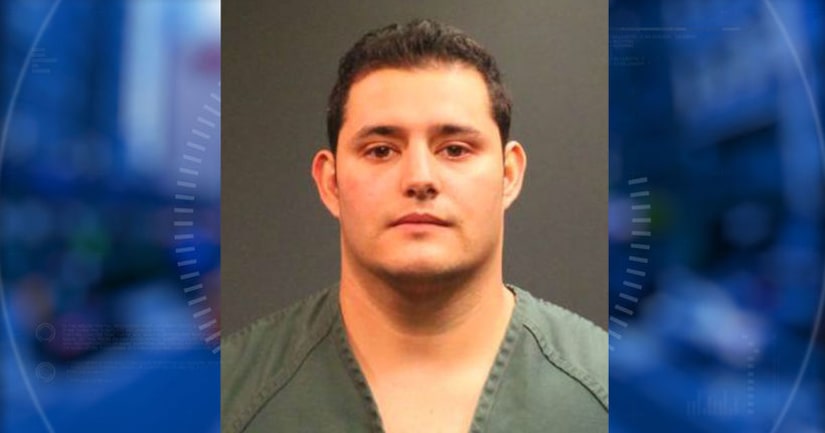 LOS ANGELES -- (KTLA) -- A witness thwarted the sexual assault of a woman in Santa Ana earlier this week and led police to the suspect, police said Wednesday.

The incident occurred about 4 p.m. Monday in the 1600 block of Palm Street.

The man apparently offered the victim a ride to a nearby Wells Fargo, but when she got into his truck, he told her he wanted to have sex, Santa Ana Police Department officials told KTLA.

The woman said no, but he asked for her number, when she refused again, the man pulled into an alley and duct-taped her face, police said.

Taylor O'Neill was heading to work in the area when he saw the suspect's truck blocking his way.

O'Neill told KTLA that he honked at the truck a few times but the driver didn't move. O'Neill got out of his vehicle to confront the driver and then he heard muffled screams and then spotted the 28-year-old victim inside, he said.

"I saw her with her face duct-taped and him on top of her choking her," he said. "That's when I tried to open the door and banged on the window to get her out of there, get her safe, and deal with him later."

During the frenzy, the victim was able to unlock the truck door and run to safety.

As the suspect was driving away, O'Neill was able to take a picture of the suspect's truck and got the license plate number, police said.

O'Neill stayed with the victim until police arrived, and he described her as being "really scared."

Authorities were able to track down the suspect, Jorge Alejandro Cruz de Armas, and arrested him Tuesday night at his workplace in Costa Mesa, police said.

A Police Department news release referred to O'Neill as a "good Samaritan" and called the crime an attempted rape.

Cruz de Armas, 27, of Tustin, is expected to be charged with suspicion of assault with intent to rape and attempted rape by force or fear.

Cpl. Anthony Bertagna said detectives believe the victim was put in a chokehold, and the news release said de Armas "began to strangle the victim and covered her mouth with duct tape."

Because the victim doesn't remember having duct tape on her face, she may have passed out, Bertagna said.

He added that investigators believe there may be more victims out there and encouraged potential victims to come forward.