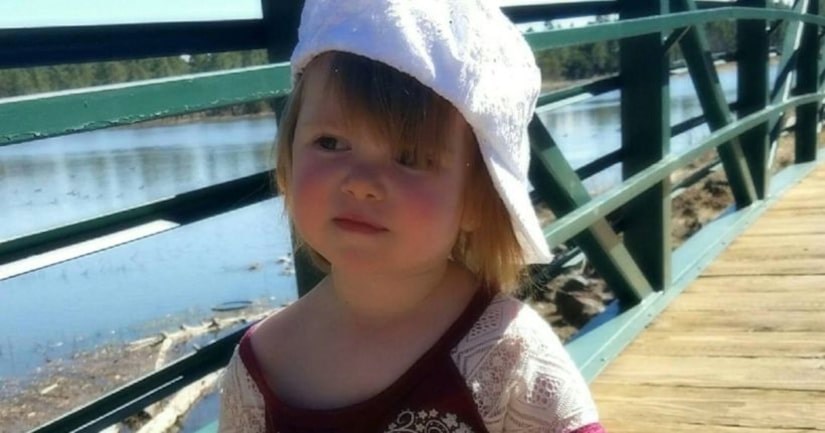 PHOENIX -- (KTLA) -- A 3-year-old Arizona girl who was hospitalized after allegedly being abused by her mother's boyfriend has died, and the 33-year-old man has been arrested, according to multiple reports.

Relatives of Morgan Koepp confirmed Wednesday that she was taken off support, three days after being admitted to the hospital, television station KSAZ in Phoenix reported.

The mother had left the toddler with her boyfriend for most of the day Sunday while she was out, according to Phoenix television station KTVK, citing court documents.

She had tried to reach him by phone all day, but was unable to, according to a GoFundMe page initially set up to pay for the child's medical expenses. When they returned home, the mother — identified in the fundraising account as Brianna Williams — noticed the little girl's face was swollen near her mouth and cheek.

She then took her daughter to Phoenix Children's Hospital where medical personnel found her suffering from broken ribs and bruises on her back and torso, KTVK reported.

Hours after arriving at the hospital, Morgan was moved to the intensive care unit, where her heart failed, according to the GoFundMe.

“She had cardiac arrest,” Tim Williams, Morgan's grandfather, told KSAZ. “They had to bring her back. She went into another cardiac arrest. They had to put a machine on her to keep her alive.”

Morgan underwent multiple surgeries, including one to remove what turned out to be a flesh-eating bacteria.

“It's a necrotizing soft tissue infection that opened up when she got hit or punched or whatever she did, and it spread throughout her body,” Tim Williams said.

A letter from the grieving mother to her daughter was posted mid-afternoon to the GoFundMe account.

“To my beautiful baby girl who taught me so much in these last 3 years. I saw you fighting and fighting as hard as you could. I saw how much pain you were in and I am so sorry you had to endure such a tragedy,” the letter read. “It breaks my heart and to see you laying there fighting so hard for mommy shows me how much you tried and how much you love me. I hate that I will never be able to watch you grow and see you again or hold you again until I one day get to heaven. But I am able to keep going because I know you are now resting in a better place.”