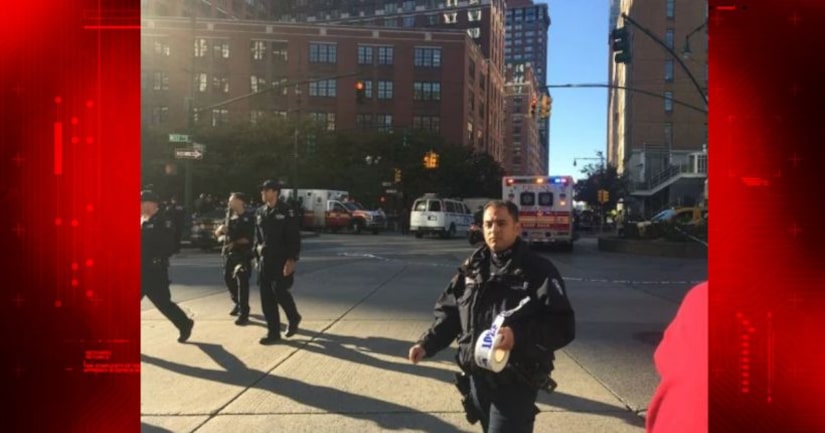 TRIBECA, Manhattan -- (WPIX) -- At least eight people were killed and 11 others were injured in lower Manhattan Tuesday afternoon after a truck hit people on a bike path in what NYC Mayor Bill de Blasio called a "cowardly act of terror." The driver of the truck, who officials call a "lone wolf" was brandishing two fake guns and is now in custody after he was shot by police.

This is being investigated as possible act of terror, officials confirm. The suspect screamed "Allah Akbar," which is Arabic for God is great.

The victims were hit by a rented Home Depot truck around Hudson Street and Chambers Street shortly after 3 p.m. The 29-year-old driver entered the West Street pedestrian/bike path a few blocks north of Chambers Street and hit multiple people on the path.

Some of the victims may have been on bicycles.

The truck hit another vehicle and then the driver ran out of the truck with a paintball gun and pellet gun and was chased by police before being shot and taken into custody. The injuries to the 29-year-old driver are not life threatening.

Photos from the scene show a damaged school bus and mangled bikes litter the street.

"I saw the car crash so I ran up the bridge," a witness at the scene told PIX11's Myles Miller. "When I ran up the bridge, I saw this dude with two guns. The guy with the two guns, for some reason, was running around. He was getting chased. And then all of the sudden, four shots went off and we all just started running."