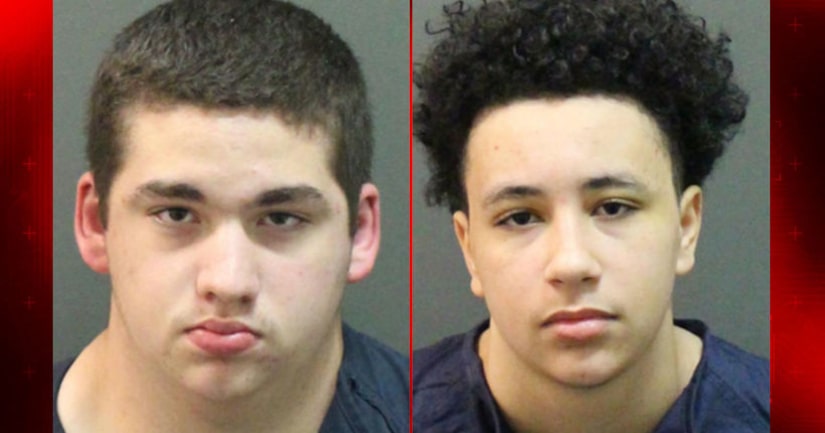 2 teens charged with manslaughter as adults

ORLANDO, Fla. -- (WKMG) -- New details released in a Winter Park teen's beating death show that the victim was fatally punched after he and his friend confronted a boy who sprayed them with a smelly spray as a prank, according to an arrest affidavit.

Jesse Sutherland, 16, and Simeon Hall, 16, are being charged as adults on manslaughter charges in connection with the death of 15-year-old Roger Trindade, who was found unresponsive near Park Avenue in Winter Park the night of Oct. 15, 2016.

Exactly one year after the boy's death, court officials released an arrest affidavit that details the circumstances of Trindade's death. That document was previously sealed because the suspects were being charged as juveniles up until this week.

Deputies say Trindade was with a male friend and two girls near Park Avenue when two boys came up to them and sprayed them with a foul-smelling spray. Trindade and his friend went to confront the boys, who told them the spray was meant to smell like "liquid a--" and they sprayed it as a prank, the report said.

One of the boys who sprayed Trindade made a phone call and told his friends, including Sutherland and Hall, to come to the stage area at Central Park because there was about to be a fight, according to the affidavit.

Sutherland and Hall rushed over with five other teenage boys.

Hall said when he arrived, he approached Trindade and his friend and asked them if they were trying to "jump" his friend, even though the altercation had not turned physical at that point, the report said.

Trindade's friend told deputies they tried to get away but they couldn't because they were surrounded.

Hall told deputies he was the first to throw a punch. He hit Trindade's friend in the face because the boy "smirked at him and was cocky," according to the affidavit.

Trindade was twitching and unresponsive when the boys ran away to a nearby parking garage to hide the prank spray and brag about what they had done, authorities say.

Deputies say Hall met with detectives on Oct. 17, 2016 -- the same day Trindade died. Hall had a smirk on his face when he asked about Trindade's medical condition. A detective told him that medical information was confidential so he could not provide that information to Hall.

"Yeah, you don't want to tell me because he's dead," Hall said with a laugh, according to the affidavit.

Sutherland spoke to detectives on Oct. 20, 2016 after his grandmother brought him to the police after she heard him talking about the altercation with his younger brother. Deputies said Sutherland initially lied about punching Trindade.

"If I knew I was the one who killed the kid, I couldn't live with myself," Sutherland said, according to the affidavit.

Witnesses told deputies that Hall was known for fighting and being involved with drugs. Another witness said one of the boys who was present during the fight approached her at school because she had seen footage of the altercation on Snapchat and told her that she better not tell, the affidavit said.

That teen, who News 6 is not naming because he is not charged as an adult, is facing a witness tampering charge.

Hall, Sutherland and the third boy were arrested in Dec. 2016 in connection with Trindade's death.

In January, Sutherland and Hall were placed on home detention and were ordered to wear GPS monitoring devices.

Hall was arrested earlier this month after Winter Park Police say he took off his monitoring device and physically battered another boy at Ward Park. He was booked into the Orange County Jail on Monday on a felony battery charge in connection with that incident.

Both teens were previously charged as juveniles in the Trindade case.