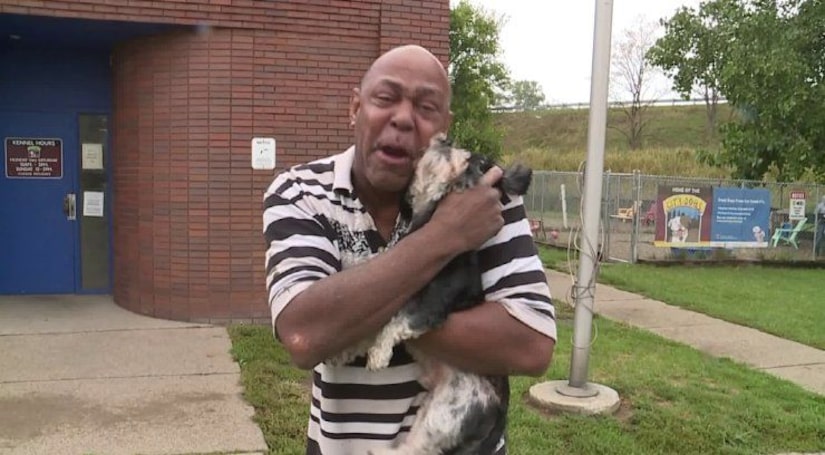 CLEVELAND -- (WJW) -- An overjoyed Andrew Wright picked up his dog Polo at the Cleveland City Kennel on Wednesday, five days after the therapy dog disappeared when a gunman stole Wright's car from a gas station.

Wright had asked for help after the Havanese purebred that alerts him if he is about to suffer a seizure disappeared early Friday morning after the carjacker fled in Wright's vehicle while he was inside Ohio City Gas at Lorain and Fulton.

The car was equipped with OnStar and was later recovered by police, but Polo and Wright's puppy, known as Baby Girl, were gone. A devastated Wright told us last night, "It's hurting, it's hurting every minute. I can't eat, I can't sleep, I hear [them] crying."

Fortunately, Polo was spotted on Tuesday wandering in a neighborhood on Cleveland's east side, about eight miles away from where Andrew's car was stolen.

Fox 8 viewer Mariah Singleton said, "We paused the TV and then we were looking and then when he called him by his real name, he started listening and stuff. So that's how we knew it was probably his dog.”

She says Polo had been following one of her neighbors around. She thought the dog was a stray that needed a home.

But Singleton contacted Fox 8 and Cleveland Police after she realized that Polo was one of the dogs that Andrew Wright had been searching for.

"I feel good, I'm happy he's home," said Singleton. When he learned about Singleton's role in reuniting him with his dog, Wright said, "Thank you for having a heart, thank God for opening your heart to call."