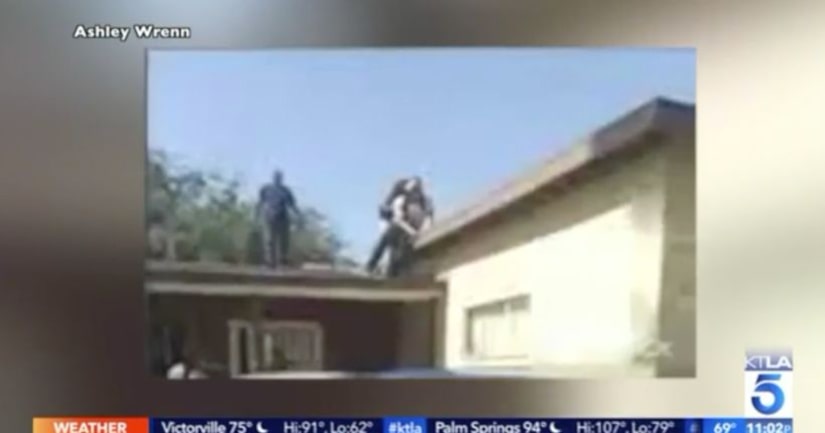 LA PUENTE, Calif. -- (KTLA) -- A man who was jumping rooftops in La Puente, evading police for nearly five hours, was finally stopped when a man who lives in the home he was on top of actually climbed up and threw him off the roof on Tuesday.

The moment was captured in a cellphone video that shows 83-year-old Wilford Burgess climbing up a ladder onto the roof of his home, first approaching the man and then pushing him off.

It all started when Los Angeles County Sheriff's Department deputies received a call from someone who said they were being followed around 6:30 a.m. in the 14100 block of Beckner Street, officials said. From that call, authorities eventually discovered a man jumping from one rooftop to another as he fled from police.

The roof-jumping went on for several hours as the Sheriff's Department even brought in a crisis negotiator to try convincing him to come down, officials said.

"He wasn't staying in one place," Burgess said. "He'd be on one edge and then around on the other parts."

After the man was on Burgess' roof for about an hour or so, Burgess said he felt it was time to try taking matters into his own hands. He decided to bring out a ladder and climb up there himself.