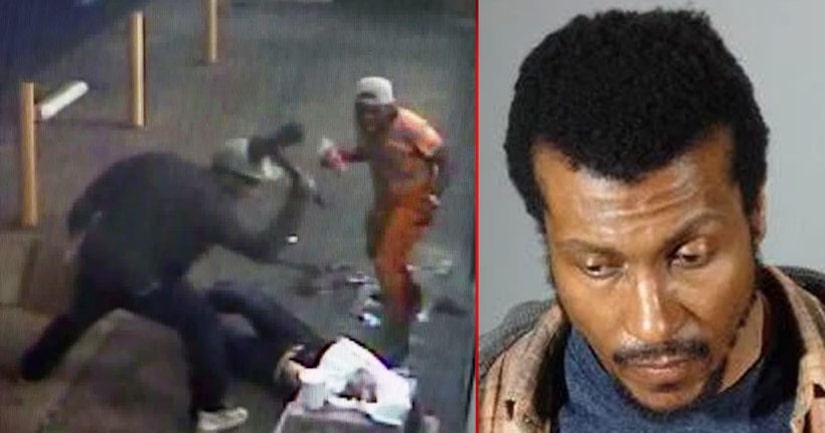 LOS ANGELES (KTLA) -- Kisu Brown was convicted Monday of brutally bashing in the skull of another man who had offered to pay for items the defendant was allegedly trying to steal at a 7-Eleven in West Hollywood, KTLA reports.

Brown, 43, of West Hollywood, pleaded no contest to one count of attempted voluntary manslaughter in the Sept. 2, 2017, incident at the corner store chain's location at 7950 Santa Monica Blvd., the Los Angeles County District Attorney's Office said.

Brown had been charged with attempted murder and aggravated mayhem but pleaded not guilty in September 2017. He is scheduled to be sentenced Aug. 29, when he will face more than nine years in state prison, prosecutors said.

MORE: Man Convicted in 'Gruesome' Ax Attack on Victim Who Offered to Pay for His Items at 7-Eleven in West Hollywood - KTLA

UPDATE Sep. 5, 2017: A man who attacked a person with an ax just outside a West Hollywood 7-Eleven store on Saturday has been taken into custody, officials confirmed Tuesday, according to KTLA.

Kisu Bradey Brown, 41, is believed to be the man who repeatedly striking another man with an ax or "hatchet-type" weapon before fleeing the scene, Los Angeles County Sheriff's Department officials said.

No further information was released about the arrest.

LOS ANGELES -- (KTLA) -- Detectives released surveillance footage and photos Tuesday amid the search for a man who attacked a person with an ax just outside a West Hollywood 7-Eleven store on Saturday.

Kisu Bradey Brown, 41, is believed to be the man who repeatedly striking another man with an ax or “hatchet-type” weapon before fleeing the scene, Los Angeles County Sheriff's Department officials said.

The incident occurred at a 7-Eleven store in the 7900 block of Santa Monica Boulevard at about 4:05 a.m. Saturday, officials said.

Brown is a local transient and “known as a violent individual” who has had “numerous” felony convictions and prior assault convictions, sheriff's Sgt. Jeff Bishop said at a Tuesday news conference.

The victim had offered to pay for items that Brown was allegedly attempting to steal from the 7-Eleven store, according to a news release from the department.

That's when Brown “became upset,” the release said, and “a struggle ensued” between him and the other man while they were still inside the store.

But the situation escalated just as the two men were leaving the store, as seen in surveillance footage. The video shows the man who deputies believe is Brown leaving first and then waiting outside to attack the victim.

Bishop described Brown as lying in wait for the victim.

Just as the victim takes his first few steps out of the store, the attacker quickly pulls a “hatchet-type” blade out of his clothing and lunges at him with it, Bishop said.

The victim falls to the ground with that first swing of the blade, the video shows.

“At that time, another individual comes out of the store and sees what's going on, as now the suspect is standing over our victim, chopping at his face,” Bishop said, calling the assault a “very gruesome attack.”

“For a real quick second, the suspect walks away,” Bishop said of the last moments of the attack. “He's still in the view of the camera. He then turns around and comes back and continues to chop at the victim's face while (the victim is) lying on the ground — before he flees.”

Brown slammed the hatchet against the victim's skull several times, causing multiple head injuries, Bishops said. Doctors were “relieving the pressure on his skull by having a tube in his head,” he said.

The victim also suffered “major damage” to one of his hands, defensive wounds caused by Brown “nearly chopping his hand in half” with the weapon, Bishop said.

He is described by authorities as a black man with black hair and brown eyes, about 6 feet tall and weighing approximately 190 pounds.

“We're hoping we can get attempted murder charges filed on this individual,” Bishop told reporters.

Deputies said the wanted man is considered “armed and dangerous” and advised people not approach him but instead call 911 or the West Hollywood Sheriff's Station at (310) 855-8850 if they see him, the release stated.