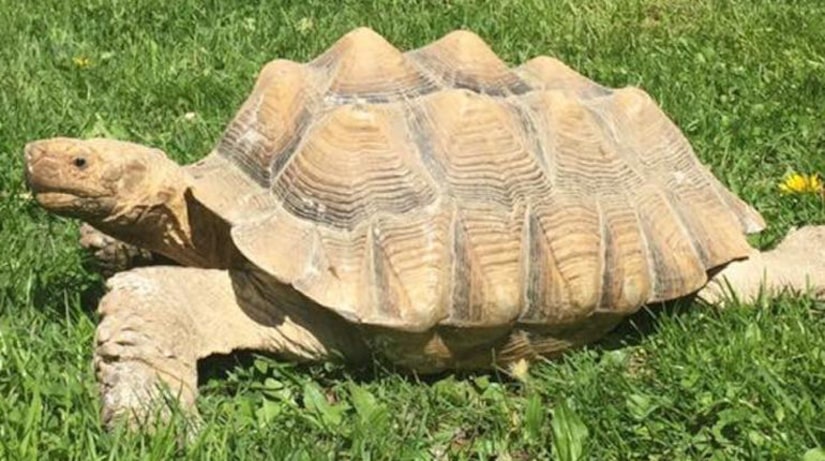 According to the Boone County Sheriff's Office, deputies responded to a call in rural Zionsville on Friday, Sept. 1, 2017, where they found the tortoise had been shot.

According to the owner, Tasha Chapel, the 65-lb. African sulcata tortoise, Merlin, had gotten loose in the area near Horseshoe Drive and the Rockbridge subdivision on the afternoon of Thursday, Aug. 31.

Chapel realized he was missing Friday and posted about the missing tortoise on Facebook.

“It's cold so he is probably burrowed in to keep warm. Please help!! He is about 65lb land tortoise (cannot swim) friendly and curious. Probably a bit scared. Will put himself up for the night at dusk,” she wrote. “He is our very loved pet and we need our big guy back!”

Several people commented that they'd seen pictures of Merlin walking along the road, and Chapel initially held out hope that the tortoise was safe. She later learned he'd been killed.

Chapel said a man who lives at a neighboring farm admitted he'd shot Merlin in the head Thursday night, claiming the tortoise had wandered onto his land and saying he feared Merlin might bite someone.

According to the Boone County Sheriff's Office, investigators are in contact with Merlin's owner, the person who shot him and multiple witnesses in the case. The department said it's “unclear what the exact circumstances prior to and after the shooting were.”

The sheriff's office is working with the Department of Natural Resources, the State Board of Animal Health and Boone County Prosecutor's Office on the investigation.

“Further information regarding possible criminal charges and the details of this incident will be provided at a later date after the investigation is complete,” the sheriff's office said. “The welfare of all who reside in Boone County is priority, whether human or animal.”