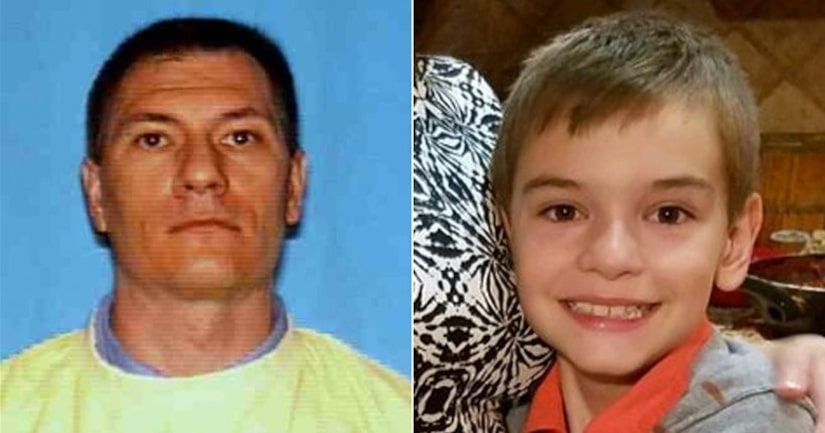 UPDATE 10 p.m. PT: A man suspected of killing his estranged wife in Santa Maria and then abducting their 9-year-old son -- before an Amber Alert was sent Tuesday -- was shot and killed in an officer-involved shooting in Encino, authorities said at a Tuesday night press conference, KTLA reports.

The boy, Daniel Morozov, was “safely located” on Tuesday evening, the California Highway Patrol tweeted. His father, Konstantin Morozov, 48, was suspected of abducting him and named a “person of interest” in the killing of his mother, according to Santa Maria police.

Konstantin Morozov died after being shot in the 5500 block of Lindley Avenue in Encino, authorities said. FBI officials and officers from the Santa Maria and Los Angeles police departments saw him coming out of an apartment there, after receiving information he would be there, KTLA reports.

UPDATE 4:35 p.m. PT: The 2017 Jeep Cherokee that Konstantin Morozov was believed to have been traveling in was located earlier this date in the City of Santa Barbara. There is no new information on Morozov's whereabouts or any new vehicle he might be associated with, Santa Maria Police announced.

SANTA MARIA, Calif. -- (KTLA) -- A man suspected of abducting his 9-year-old son, prompting an Amber Alert Tuesday, is also a "person of interest" in the slaying of the boy's mother, police said.

Authorities were called to the 200 block of North College Drive Monday, where they found a shooting victim dead at the scene, according to a Santa Maria Police Department news release.

During the investigation, police requested an Amber Alert for Daniel Marozov, the news release stated.

Marozov's mother was the victim in the shooting, Sgt. Jesus Valle told the Los Angeles Times.

Konstantin Morozov, the boy's father, is believed to be with his son and is considered as "person of interest" in the slaying, Valle said.

An Amber Alert is in place for Santa Barbara, Los Angeles and Ventura counties, according to the California Highway Patrol.

It was unclear where Konstantin Morozov may be headed with his son, but police asked that special attention be paid to international airports and border crossings.

Konstantin Morozov should be considered armed and dangerous, according to the CHP.

Anyone who spots the two were asked not to approach, but to call 911 instead.