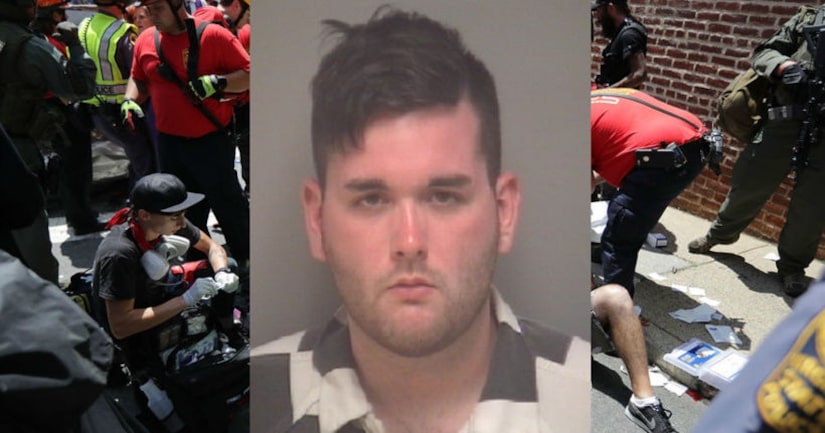 CHARLOTTESVILLE, Va. -- (WTVR) --The suspect arrested in a deadly crash near a scheduled rally of white nationalists has been identified as James Alex Fields Jr., of Maumee, Ohio, according to Superintendent Martin Kumer with the Albermarle-Charlottesville County Regional Jail.

The 20-year-old was charged with one count of second degree murder, three counts of malicious wounding and one count of hit and run attended failure to stop with injury.

Video of the incident shows a gray Dodge Challenger driving quickly down a narrow side street lined with walking protesters. The sports car rams into the back of a silver convertible, which hits the van in front of it. Soon the Dodge driver slams the car in reverse, going back up the street at a high rate of speed, dragging its front bumper. Several people chase the car. As the sports car retreats, a red and white athletic shoe falls off the bumper.

Another video shows at least one person being thrown over the rear of the car onto the roof of the silver convertible then sliding down onto the hood.

Witness Chris Mahony said he and a friend, who shot one of the videos, were walking down the street when he saw the gray car on the other side of the street.

"It just sat there, looking down the road," he said. "I thought that's a bit strange. There didn't seem to be any other cars stopping him from going. And then a couple moments we heard a car going incredibly fast down the road and then it plowed into the crowd."

Suspect's mother: 'I told him to be careful'

Fields' mother, Samantha Bloom, told the Toledo Blade, a CNN affiliate, that he told her last week he was going to an "alt-right" rally.

"I told him to be careful... if they are going to rally, to make sure he is doing it peacefully," she told the newspaper.