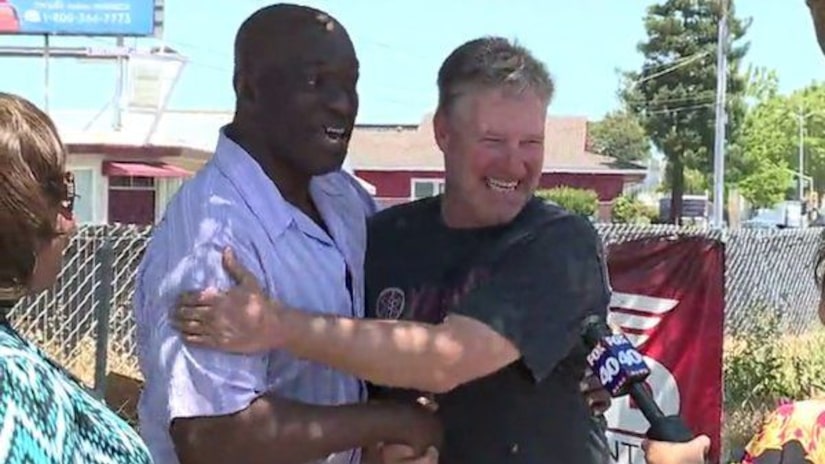 FAIRFIELD, Calif. -- (KTLA) -- Two good Samaritans who came to the aid of a California Highway Patrol officer who was being beaten by a suspect in Fairfield over the weekend were reunited Tuesday.

The incident began Saturday morning, when witnesses reported seeing a driver in a Ford truck hitting vehicles between Highway 50 in Rancho Cordova and Interstate Canyon on Saturday morning, according to KTLA sister station KTXL in Sacramento.

Joel Jones was driving with his wife on I-80 in Fairfield when he saw the driver strike vehicles.

The couple called 911; a short time later, the driver slowed down and stopped. A CHP officer pulled over behind the vehicle and asked the driver to get out of the truck. At that point, the suspect approached the officer and punched her, according to Jones.

"She staggered, he punched her again," Jones said. "She went down. He punched her three more times. Then he stomped her. Started stomping her.

"I couldn't sit there and watch what I thought was going to be a murder," he said. "I just rushed him and somehow, it was like a hook or a half punch, or a half forearm. ... We flew, he flew five yards and so did I. His feet are up in the air."

Jones was trying to subdue the suspect on the ground when another man, Greg Bunting, saw the scuffle and made the decision to stop and help.

The two men were eventually able to get control of the driver. Meanwhile, Jones' wife comforted the injured CHP officer and prayed with her.

The officer suffered cuts, bruises and numbness and was taken to a hospital for treatment, Bay Area television station KRON reported. Her injuries were not life-threatening, a CHP official told the station.

The suspect, identified as Gary Cosovich of San Jose, was arrested on suspicion of attempted murder on a peace officer, KTXL reported.

On Tuesday, the two men united for the first time since the incident, where both said they felt they were placed in the situation to serve a purpose.