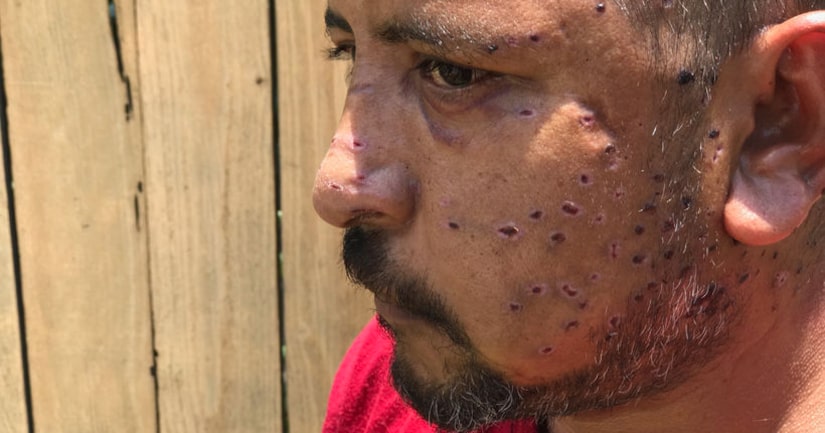 AUSTIN, Texas -- (KXAN) -- Nurses told Austin police a cyclist hit by a random shotgun blast on June 7 might not survive due to pellets that entered his brain stem, causing concern for hospital staff.

According to a police affidavit, the cyclist was found by a citizen who began performing CPR on him around 11:52 p.m. at 6305 East Riverside Dr. Austin-Travis County EMS transported the victim with then unknown injuries to his back, shoulder and head. When officers arrived they found a small puddle of the victim's blood and a 'shotgun wad.'

On June 8, detectives working a family violence case informed the officers working the shooting case that their cases might be related. A man had informed police that he was driving around with Merrick Isaacks, 19, who needed to "blow off steam" after assaulting and threatening to shoot his girlfriend with a shotgun. The man also told the family violence investigators that Isaacks fired a shotgun out the window of the vehicle they were in on East Riverside Drive around the same time the cyclist was hit.

During a police interview, the driver said Isaacks first directed him to stop at a red light at the intersection of Montopolis Drive and East Riverside because he “wanted to shoot or kill someone standing at the bus stop.” The witness told police there were several homeless people at the stop so he continued driving through the intersection, telling Isaacks that the light had turned green and they couldn't stop.

According to the affidavit, the driver passed a Shell station 250 feet down the road from the intersection when they saw a bicycle travelling in the same direction. The driver told police Isaacks didn't say anything and fired the shotgun one time out the passenger side window.

The driver said that after they left the area Isaacks, who he had only known for about four months, forced him to drive around most of the night as he fired the shotgun several times in different locations.

Isaacks is currently in the Travis County Jail on an Aggravated Assault with a Deadly Weapon charge and is being held on a combined $250,000 bond.

The victim was released from the hospital but is expected to return to have the pellets removed. On KXAN News at 6 p.m. Alyssa Goard speaks to him about what happened that night.