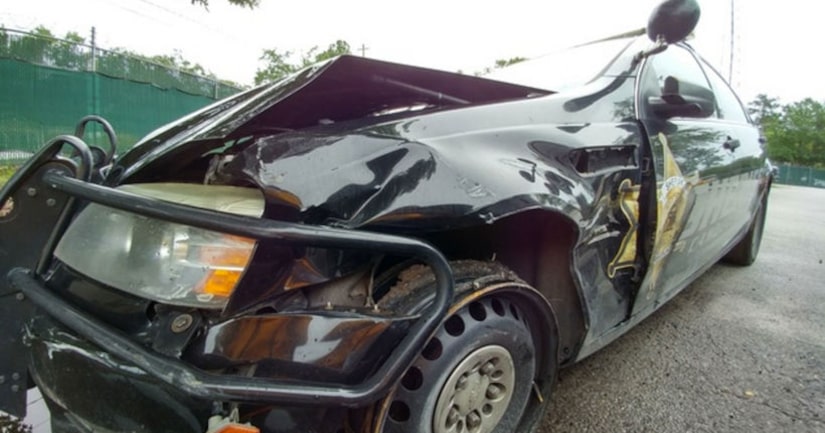 CAMDEN COUNTY, Ga. -- (WJXT) -- A man suspected of driving under the influence managed to steal his arrested deputy's cruiser, and cause a lot of damage along the way, according to the Camden County Sheriff's Office.

As for how Tippins stole the cruiser, deputies said it was quite tricky, especially considering he was handcuffed in the backseat.

Authorities said Tippins is small and just flexible enough to get his handcuffs from behind him to his front.

“The young man was able to slide the cuffs underneath him -- through his feet, pull here, then go through this opening, which is 12 inches by 13 inches,” said Capt. Larry Bruce, of the Sheriff's Office, as he showed News4Jax what must have happened.

Tippins is a very slender 5-foot-2 inch man who weighs just more than 100 pounds. And he used that to his advantage while the arresting deputy was outside the car, according to the Sheriff's Office.

“He pulled himself into the driver's compartment and then put the car in drive and drove off, leaving the deputy on the side of the road,” Bruce said.

Deputies said Tippins was beyond drunk when they spotted him passed out behind the wheel of his car on Bedell Avenue, not far from the Sheriff's Office.

Tippins was arrested after failing a sobriety test, deputies said.

But then once he sped off in the cruiser, deputies said, Tippins led authorities on a high-speed chase that damaged several law enforcement vehicles. At one point, deputies said,Tippins even drove on the rims after he hit spike strips.

Tippins was eventually captured when deputies forced the stolen car into a ditch. Bruce showed how snug the handcuffs must have been on Tippins.

“Normally, you're about halfway on a person with a normal-size wrist, which would be about there,” Bruce said. “This young man was about to here, which is quite small for (a) wrist. My two fingers can only get in there.”

As for the deputy who had his car stolen, “I'm sure the deputy that saw his car driving away felt this was one of the craziest moments in his career,” Bruce said. “A lot of the deputies are calling the boy 'Houdini' because this is a very small opening to get through.”

Tippins is being held on $34,000 bond. Investigators believe he was trying to speed back to his home in Jacksonville.