It can only be described as a week in hell. A 28-year-old woman held captive, beaten, sexually assaulted -- even injected with heroin to control her.

Gabbe Rowland is a survivor. She's opening up about her week in hell hoping someone else out there could possibly escape a deadly situation.

Gabbe Rowland had the voice of an angel, but that beautiful singing voice would be silenced when the 24-year-old singer meets the devil himself -- Justin Mustafa, a criminal who Gabbe says is addicted to heroin. But Gabbe is hypnotized by her old schoolmate's bad-boy charm.

"I found him physically attractive. He had qualities about him, he came across as very honest, very hard working," said Gabbe.

But Gabbe's mom Marilyn isn't buying any of that and her "mother's intuition" is right on the money.

"I Googled him and found out that he was going to jail for his crimes against another woman," said Marilyn Rowland.

And those crimes are truly detestable: Mustafa was making a sex tape with a girlfriend without her knowledge.

"He had asked 'Have you ever heard about me in the paper? Did you ever read about me?' and I said 'No,'" said Gabbe. "And he came forth right away and told me about an open court case that he had with a previous girlfriend, and I took that as complete honesty, and figured 'Well, you don't have to tell me that, but you are.'"

It should have sent Gabbe running, but instead she was visiting him behind bars.

"All the way through this year when he was in jail, I thought she would change her mind, she would leave him," said Marilyn.

Gabbe didn't change her mind, and Mustafa emerges from prison paranoid and violent, accusing Gabbe of cheating on him, and beating her in retaliation. Gabbe broke up with him.

Then Gabbe made a move that put her right back in danger: She reached out to him again.

"I told him that I thought I was pregnant and we should try working on our relationship for the sake of this child, and he was in agreement," said Gabbe.

Sadly, Gabbe miscarries. But that tragedy seems to bring the couple together.

"There was, I always kind of refer to it as a 'good month,'" said Gabbe. "We would have cookouts and go out for ice cream and bike rides. And then at the end, on June 29th, everything changed.

June 29, 2013 is the Saturday when an unhinged Mustafa's switch flips again.

"He started accusing me of cheating on him while he was in jail," said Gabbe. "We were in the shower and I remember hugging him, kissing him and just taking a step back and wiping the water off my face and as soon as my hands went down by my side he just started backhanding me across my face, to the point where I lost my balance. I was knocking over shampoo bottles, and then trying to keep my balance in the shower."

But it's not over. Mustafa has a plan to keep Gabbe under his control forever.

"We were driving around and he started praising himself, saying he's such a wonderful boyfriend," said Gabbe. "He was naming off things that an average boyfriend would do with no trouble and would be happy to do it. But his claim was that because he does drugs, that it's a lot harder for him."

Then Mustafa insists he wants to prove it.

"He told me that he wanted me to feel what he felt," said Gabbe.

Mustafa pulls his car off onto a path hidden from the highway.

"We're parked on some dirt road and he told me that he was going to inject me," said Gabbe. "I told him no. I had never done drugs in my life. I had no interest in doing them. But he made me put my arm out, and he was looking at me."

And he injected her with heroin. If there's any euphoria from the mind-bending narcotic, it was quickly replaced by sickness and fear.

"I would constantly throw up throughout the day," said Gabbe. "The tops of my legs were constantly itchy. My back was itchy. I just remember nodding off, and it was not enjoyable. At all."

Day in and day out for a week, Gabbe says Mustafa is injecting her with heroin, beating her when she doesn't comply.

"I went to work with black eyes, I had bruises across my face," said Gabbe. "He would constantly tell me 'You're a bad girl. You don't listen.'"

And for "not listening," Gabbe pays a brutal price.

"We were driving around and he pulled down a dirt road, and he got out of the car and he told me to get out as well. And he told me to pull my pants down and bend over," said Gabbe. "So I pulled my pants down and I bent over the back of the car and his belt just hit me over and over and over again, and I remember pushing my body so close to the car hoping that I would just melt into the car and I wouldn't feel it. I started telling him 'Stop.' I was crying, I was begging and pleading for him to stop. And when he stopped, he raped me."

Gabbe's resistance may be finally broken. But the ruthless Mustafa has one more trick up his sleeve, and it's the beginning of Gabbe's ultimate night in hell.

"He wanted me solely dependent on him," said Gabbe.

And she's too terrified to reach out for help.

But the worst is yet to come. On Monday, July 1, Mustafa drags Gabbe down to a whole new level of humiliation. What Gabbe says Mustafa forced on her is sickening.

With Gabbe's spirit broken after a week of forced heroin injections and whippings with a leather belt, Mustafa forces Gabbe to perform a twisted sex act far too graphic to repeat.

"Because I felt like he was going to kill me," said Gabbe. "There was no way out of that bedroom."

Gabbe says Mustafa thinks he has humiliated her to the point she's completely under his control. But the next day, while in the car of a friend, Gabbe suddenly realizes she can't keep silent any longer.

"Something clicked inside of me and I told her, I said 'Turn around, go to the police station,'" said Gabbe. "I knew that I had to press charges because if I don't say something, if he's not held accountable, he's going to do it to someone else."

With renewed strength Gabbe returns home to her family, and open arms.

"I needed to save her," said Marilyn. "I tried to be there for her 'cause that's all you can do."

Justin Mustafa is arrested on multiple charges, including assault and battery with a dangerous weapon.

But Gabbe's nightmare isn't over yet. She took the stand twice.

Gabbe recounts her week in hell to a jury. But Mustafa and his defense team are not through with a sick twist of the knife.

"They said that I liked rough sex, that it was just 'S&M,'" said Gabbe.

Thankfully the jury didn't buy it. After a three-day trial they slam Justin Mustafa with guilty verdicts for assault and battery; assault and battery with a dangerous weapon; and witness intimidation. He was sentenced to six years in prison.

Gabbe still struggles in a prison of her own -- the unshakable memory of that horrible week.

"I was diagnosed with P.T.S.D., anxiety, depression, triggers, flashbacks, nightmares, disassociation. All of it," said Gabbe.

But the girl with a beautiful voice is finally speaking out as an advocate for other women trapped in a cycle of violence and abuse.

"I would tell them that they're not alone. Someone is going to help you," said Gabbe. 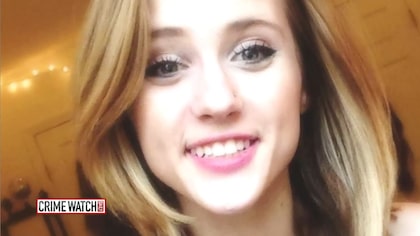